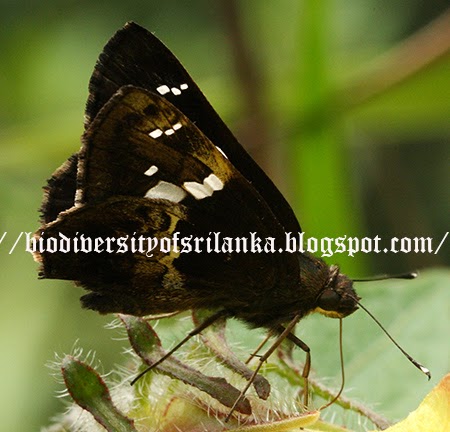 Rather rare butterfly with fast flight. As per Woodhouse and Ormiston it has been recorded from Haldummulla in July, the hills above Rathnapura in April, July, September and most frequently from the 'Kandy district' during these months as well as in February and March. Ormiston collected single specimen from Kottawa forest reserve (Ormiston W., 1924 & Woodhouse L.G.O., 1950). Its larval host plants are ඉඳි[Indi](Phoenix pusilla) and හීන් වේවැල්[Heen We-wal](Calamus rotang)

Rather rare indigenous prostrate herb found in sandy open areas near the coast in the northern and northwestern parts of the island.

A non-venomous, semi-aquatic snake inhabiting streams, rivers, paddy fields, tanks, marshes etc. from lowlands up to about 1200m elevations in the hills. Mainly a diurnal snake though sometime active even during the night. It feeds mainly on frogs and fish.
Posted by Bushana at 6/25/2014 06:57:00 AM No comments: 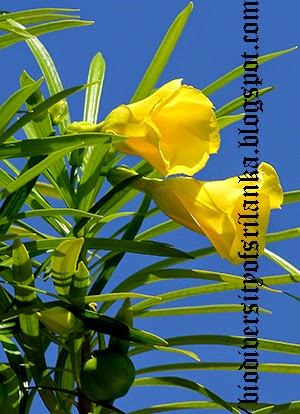 An introduced tree cultivated in gardens and roadsides. Flowering throughout the year. Native to Central and South America.
Posted by Bushana at 6/23/2014 06:59:00 AM 1 comment:

Birds that appear outside their normal range are known as vagrants. This post summarizes up to date published sight records of vagrants of the family Sylviidae (Old World Warblers) in Sri Lanka.

1) Broad-tailed grassbird (Schoenicola platyurus)
Legge found a single specimen of this bird in British museum which was procured by Hugh Cuming [A well known collector of shells and other natural history specimens] from Ceylon. He doubted it as a straggler in Sri Lanka and gave a most probable place where this bird can be occurred since once he met with a bird with similar disposition, which has never before seen in Ceylon from that place. The place he mentioned is Muthurajawela marsh which he described as “great swamp lying between the Negombo canal and the highroad to that place from Colombo”(Legge V. 1880:694-95). Wait while assuming it as a rare resident species writes: “Messrs. Cave [Walter A. Cave] and Symons [C.S. Symons] believe they once saw two specimens in lantana scrub near the government bunglows in Colombo”(Wait W.E., 1931). Phillips mentioned about two more rather doubtful sight records in 1939. Single bird at Gammaduwa in the East Mathale hills and another two birds on a hillside at Waitalawa, Nugatenna,( 2500ft), in the Rangala hills to the North of Kandy. Both of above instances birds were observed in tall ‘Mana’ grass.(Phillips W.W.A., 1978:79). Wijesinghe discussed the evidence related to the specimen mentioned by Legge and concluded that there would seems to be little or no ground for including it in the Sri Lankan list (Wijesinghe, D. P., 1983). However base on Phillips sight records (Those were reassured to Wijesinghe by Phillips himself by a letter stating that he is almost certain of identification) and several other circumstantial evidence he discussed in his paper suggested that this species could be an occasional visitor to Sri Lanka (Wijesinghe, D. P., 1983) Ranasinghe (Ranasinghe, D. B., 1997) believes it as a probable vagrant to low lands and lower hills.

Species for which there are only one or two sight records exist categorized here as unconfirmed vagrants. Problematic records without sufficient details are also included.

3) Lanceolated Warbler (Locustella lanceolata)
A sight record by Deepal Warakagoda of a single bird at Bellanwila-Attidiya marsh in 12th October 1991 is the only record of the occurrence of Lanceolated Warbler in Sri Lanka (Warakagoda, D., 1992). It remained there till the end of April/early May of 1992 (Hoffmann, T. W., 1993)

Common climbing herb found in lowland forests and waste lands in both dry and wet zone. Flowers and fruits occurs throughout the year.

Cherry barb is an endemic fish inhabiting shaded shallow, slow flowing streams with silt substrate and leaf debris in the wet lowlands from Kelani to Nilwala basins up to about 300m a.s.l.  It is not uncommon but becoming rare in most former habitats due to deforestation, pollution of streams and over fishing to export by the ornamental fish traders. It is an omnivorous fish and feeds on detritus, green algae, diatoms, diptera and animal matter (Pethiyagoda, R., 1991). Various color forms are reported depending on the locality. 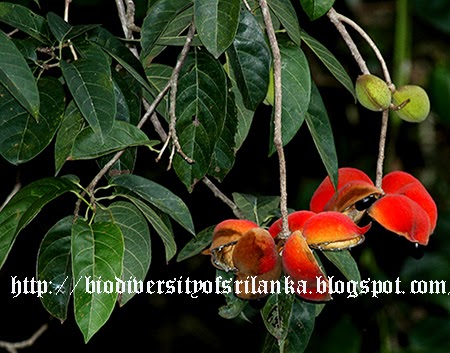 Small to medium tree occurs in monsoon forests, along roadsides, rocky outcrops etc. from sea level to about 900m elevation. Also cultivated as an ornamental and as a fence tree.
Posted by Bushana at 6/13/2014 06:56:00 AM No comments: 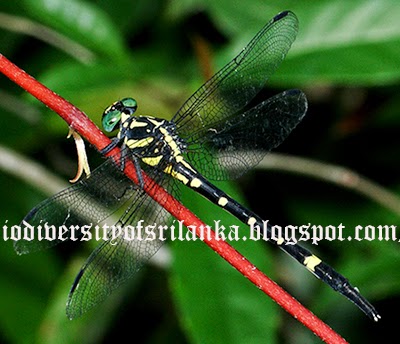 Rather uncommon dragonfly occurs in rivers and stream habitats from lowlands to mid hills.
Posted by Bushana at 6/11/2014 07:23:00 AM No comments:

A large tree occurs in wet lowland to submontane and montane primary and secondary forests. Often cultivated due to medicinal value of all of its parts. Fruit edible and wood use in constructions.
Posted by Bushana at 6/09/2014 06:59:00 AM 2 comments: 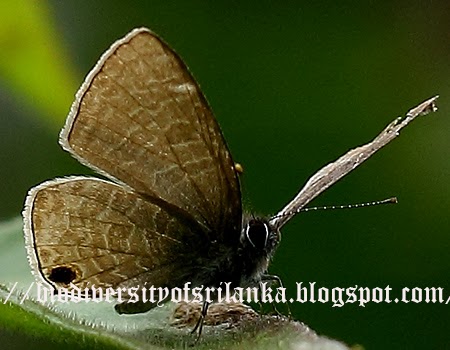 Very rare butterfly found in forests and well wooded areas throughout the island, particularly in the wet zone. It settles on the damp earth. The females are much rarer than males. No records available on its early stages of the life cycle.

Birds that appear outside their normal range are known as vagrants. This post summarizes up to date published sight records of vagrants of the family Cuculidae (Cuckoos) in Sri Lanka.

1) Asian Emerald Cuckoo (Chrysococcyx maculatus)
Peter Brown in his “New Illustration of zoology” figured this cuckoo stating that his specimen of the “spotted curucui” as having been sent from Ceylon by governor Loten (Legge V., 1880: 309 & Phillips, W.W.A., 1948). Legge remarked that “It has not, to the best of my knowledge, since been met with or heard of even in the island”. However type description of the Emerald cuckoo based on above painting (Phillips, W.W.A., 1948). Although several authors on Sri Lankan avifauna mention that Loten’s is the only record of its occurrence in Sri Lanka, Hue Nevill has given a sighting of an adult male near Rane, in the south-east Sri Lanka in 1866 (Wijesinghe, D. P., 1983 & Nevill, H., 1887). There is a recent sight record also of it in Sri Lanka by Upali Ekanayake in 2004, single bird in January and another (Probably the same bird?) in February at Sigiriya (Siriwardana, U., 2005)

2) Lesser Coucal (Centropus bengalensis)
Occurrence of this Coucal in Sri Lanka is base on a single specimen found by A.L. Butler in a collection of a native dealer, procured in the North Western province in April 1896. Wait doubted Lesser Coucal as a possible rare resident (Wait W.E., 1931:220).  Later on Philips noted a rather doubtful sight record in the jungle near Valaichchenai in the Eastern province in February 1947 (Philips W.W.A., 1978: 50). He believed it as a rare vagrant to the low-country dry zone. Ranasinghe also considered it as a possible rare vagrants to low lands (Ranasinghe, D.B., 1997)

An introduced plant native to India, Indo-China and Malay peninsula. Very common in home gardens where cultivated as an ornamental vine and also escaped and naturalized in some disturbed areas including secondary forests. Flowering throughout the year. 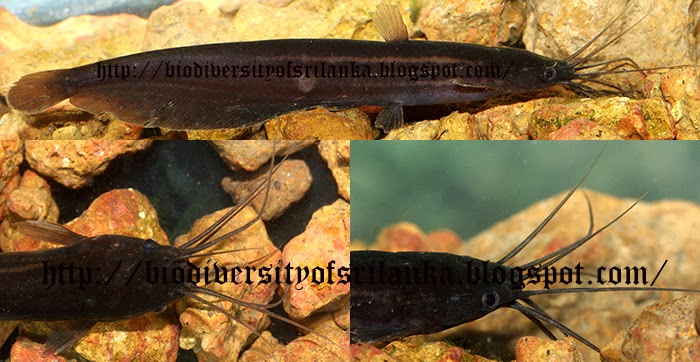 Stinging Catfish is a common fish of swamps, ponds, and tanks of low country of both wet and dry zone. Sometime it can be found even in brackish water. Copper red color of young fishes (pic above and referred as Rathu Hunga[Red Hunga]) changes to the dark brown with two yellow lateral bands of the adults. Uniform yellow color forms are also occurs (Refers as Kaha[Yellow] Hunga in vernacular language) and assumes as adults in sexual maturity. When handling it can inflict painful wounds by its pectoral spines. Stinging Catfish is an omnivorous fish.
Posted by Bushana at 6/01/2014 05:57:00 PM No comments: