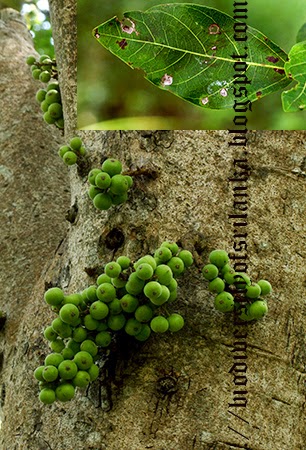 A large indigenous tree with buttresses trunk. Common and found often along rivers in the low country.
Posted by Bushana at 7/31/2014 07:13:00 AM 3 comments: 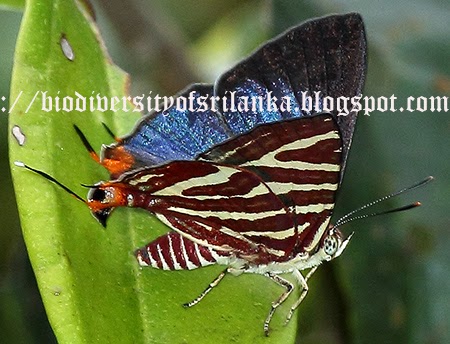 Long-banded Silverline is a rare butterfly found in forests and such well wooded areas from lowlands to hills up to about 1200m a.s.l. It is the largest Sri Lankan Silverline. Its larva feeds on Terminalia, Xylia(?), Convolvulaceae and Dioscorea pentaphylla (කටු-අල[katu-ala]) species (Woodhouse L.G.O, 1950). Larva also attended by Crematogaster ants.
Posted by Bushana at 7/29/2014 07:08:00 AM No comments: 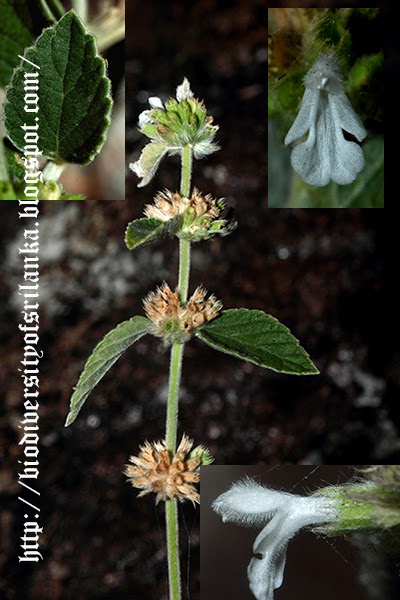 Perennial indigenous herb common in rocky embankments and roadsides from 100m altitude in dry lowlands to about 2000m a.s.l. in the hills. Common in the Uva province.Flowering throughout the year.
Posted by Bushana at 7/27/2014 07:39:00 AM No comments: 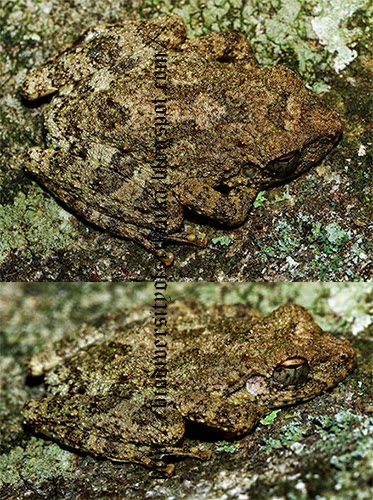 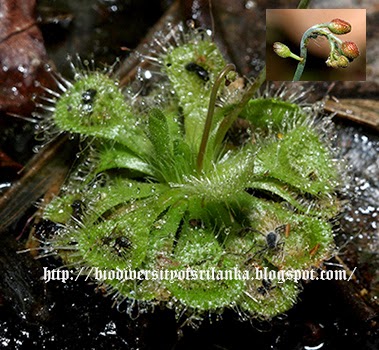 A small stemless herb found in moist and sandy places. Usually among open grassy vegetation. It is an indigenous and common plant distributed in all elevations. Leaves covers with long stalked glands with sticky drops enabling the plant to capture and digest small insects.
Posted by Bushana at 7/23/2014 07:19:00 AM No comments:

Rather common endemic damselfly found in streams and riverine habitats from lowlands to mid-hills.

An indigenous shrub or small tree common in dry scrub lands, monsoon forest understory, coastal areas and open secondary vegetation in the low country.
Posted by Bushana at 7/19/2014 07:44:00 AM No comments: 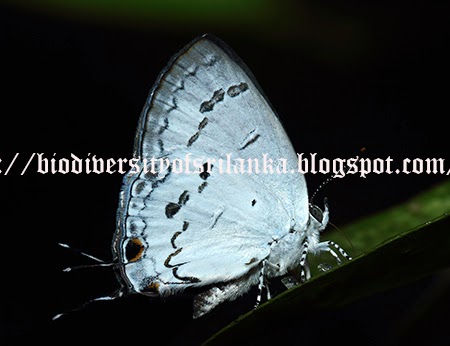 Rather uncommon butterfly occurs from lowlands to mid-hills. Males often settle on damp earth and stream beds. It flies close to the ground and flight similar to much common White Four-Ring (Ypthima ceylonica). So it can be often mistaken for it and thus ignored. Its larval host plants are orchid species such as Arundina graminifolia, Spathoglottis plicata, Vanda tesssellata etc. 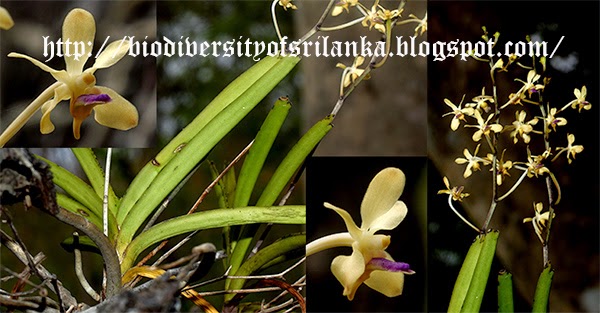 Rather common epiphyte found on trees of tropical dry mixed evergreen forests in dry and intermediate zone lowlands up to mid hills.
Posted by Bushana at 7/15/2014 07:11:00 AM No comments:

Birds that appear outside their normal range are known as vagrants. This post summarizes up to date published sight records of vagrants of the family Columbidae (Doves and Pigeons) in Sri Lanka.

1)Pale-capped Woodpigeon [Purple Woodpigeon] (Columba punicea)
Single specimen collected by Layard from Sri Lanka is deposited in Poole museum.He remarked that it is but rarely a visitant of the island and believed it occurs during the fruiting season of cinnamon trees (Legge V., 1880:906). While doubting that it visits only during the fruiting season of cinnamon, since visit of it does not occurs annually Legge noted a sight of a flock of brown color pigeons on cinnamon bushes near Borella in latter end of 1869 about the size of the present species. Since there is no other species which would answer the description he concluded that it might be a flock of Purple Woodpigeons. (Legge V., 1880:906) Kotagama and Ratnavira noted few sightings (Kotagama S. & Ratnavira G. 2010: 238 Quoting CBCN 1983, May:18)

2)Red Collared-dove [Indian Red Turtle-dove] (Streptopelia tranquebarica tranquebarica)
Layards procured half a dozen specimens of this tiny turtle-dove from a small breeding colony in a Palmyra and coconut palm tope, in the middle of a parched plain between Point Pedro and the Jaffna/Chavakachcheri area (Legge V., 1880: 921-22). Neither Layards nor any other observer met with them nesting in Jaffna or any other area of the country then after. Wait believes that Layard’s finding was probably occurred during April (Wait W.E., 1931: 299). It was not recorded since then till single adult male was collected on the 24th November 1951, near Panama, on the east coast (Phillips W.W.A., 1978: 44 quoting Phillips W.W.A., 1952 checklist:53). Recently Vimal Tirimanna and Anura Ratnayake reported a sight record of possible juvenile female Red Collared-dove from Kithulgala - rather unusual place than its previous occurrences- on 10th March 1996 (Tirimanna, V., 1996) Two birds were also observed at south of Arugam bay in October 2005 by Uditha Hettige and Chinthaka de Silva (Sirivardana U. & Warakagoda  D. , 2006.) 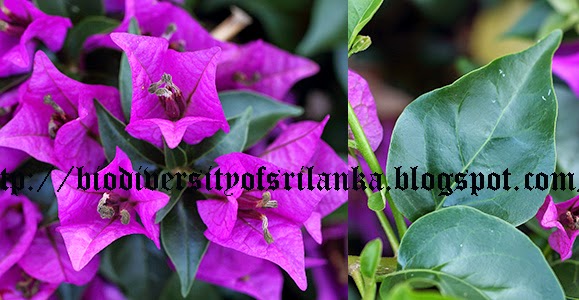 Native plant of South America. Introduced and widely cultivated. Flowering throughout the year. Flowers of varies colors occurs. Most Bougainvilleas are hybrids of Bougainvillea spectabilis and Bougainvillea glabra.

\
Rather common endemic fish occurs in shallow, shaded forest streams with a silt substrate. Also not uncommon in saline parts of mangrove swamps (Pethiyagoda R., 1991). Its diet consists of small insects, insect larvae and fish fry.  As per Pethiyagoda Day's Killifish is more or less confined to the Kelani basin and adjacent coastal areas(Pethiyagoda R., 1991). According to the Sujan Madhuranga it is reported from Aththanagalu and Kelani basins (Maduranga H. G. S. , 2003). Later on Prasanga Wickramatilake reported it from Udugama stream, a tributary of Gin river(Wickramatilake P., 2003) and H.B.Jayaneththi & H.G.S.Maduranga from upper tributaries of Kalu river in Kukulugala proposed forest reserve (Jayaneththi H.B. & Maduranga H.G.S, 2004).  Sampath de Alvis Gunathilake  noted that it is common in both Kelani and Kalu drainage (Gunathilake S. ,2007). So according to all publish data it is common from Aththanagalu basin to Gin river basin in wet zone up to lower hills.

\
Recent addition to the flora of Sri Lanka (de Vlas J & J, 2008) which was not described in Flora of Sri Lanka volumes. An indigenous low shrub found in brackish, grazed places near the south coast. 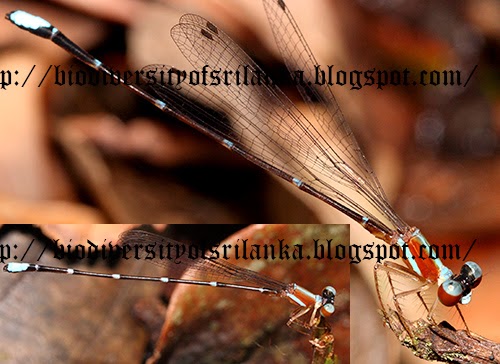 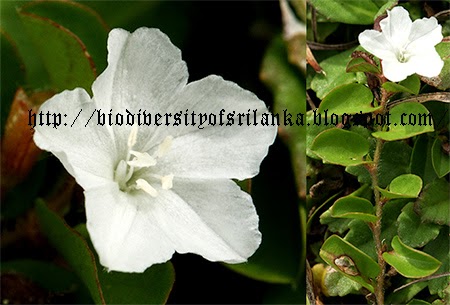 A creeping herb native to tropical America. Introduced in 20th century and now naturalized and widespread along roadsides, grasslands and scrublands.
Posted by Bushana at 7/01/2014 06:32:00 AM 1 comment: