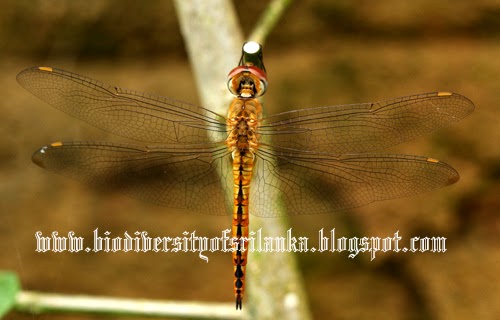 Very common insect inhabiting marshes, paddy fields, tanks etc. from lowlands to mid-hills. It usually emerges as large numbers when they do. Unlike most other dragonflies migratory habit has been observed among Wandering Gliders and high flying groups of them often seen away from water.
Posted by Bushana at 9/29/2013 07:58:00 AM No comments: 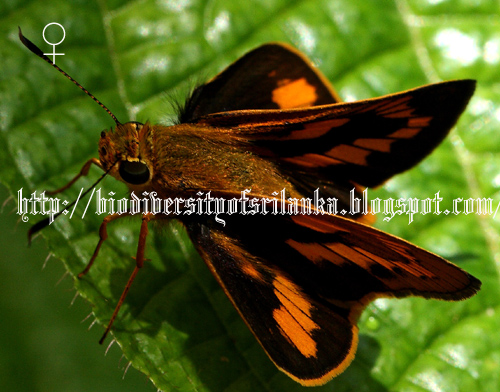 Rare insect of mainly wet zone lowlands up to about 1500m. usually found settled on roadside grasses or weeds. Larval host plants are bamboo (Bata) species.
Posted by Bushana at 9/27/2013 07:47:00 AM No comments: 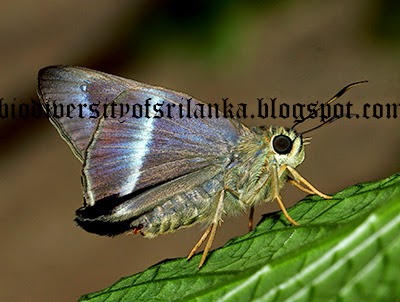 Common Banded Awl is a rare butterfly found in forests all over the island but particularly common in the wet zone and hill country while comparatively scarce in the low country dry zone. It active at dawn and dusk though may be even appears day time in dull days. It rests on the underside of the leaves and usually fly short distance when disturbed to settle down again on the under side of another leaf with its wings close over the backs.  As per Ormiston it appears suddenly in great numbers during the north-east monsoon (October- December) and he believed it as a migratory butterfly since in October 1916 he noticed great flights of large Hesperiidae on several evenings just before dark, all going south (Ormiston W., 1924).  Its larval food plants are Magul Karanda [මගුල් කරඳ] (Pongamia pinnata) and Kalawal[කල වැල්] (Derris scandens)
Posted by Bushana at 9/25/2013 07:49:00 AM No comments: 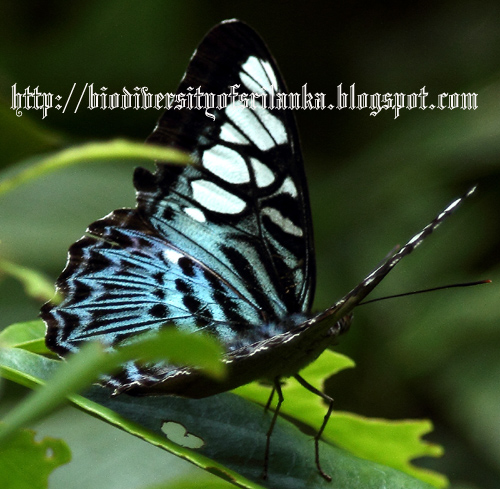 Clipper is a locally common butterfly in the wet zone forests from sea level up to about 1200m altitude. It has a very strong distinctive flight and usually flies at mid canopy level.  Its larval host plants are Hondala[හොඬල] (Adenia hondala) and Rasakinda[රසකිඳ] (Tinospora cordifolia)
Posted by Bushana at 9/23/2013 08:34:00 AM No comments: 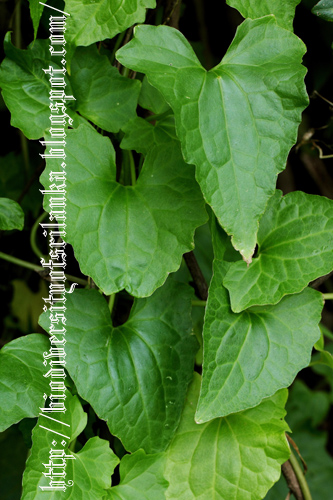 An introduced and very common creeping and climbing herb often growing over and covering other plants and shrubs. It is a weed of forest edges, roadsides, waste lands and secondary forests. Flowering from October to March. Native to tropical , .
Posted by Bushana at 9/20/2013 07:26:00 AM No comments:

Sri Lankan or Ceylon Rose is an uncommon endemic butterfly found in the low country wet zone forest areas. Its larval host plant is Thapasara Bulath[තපසර බුලත්] (Thottea siliquosa).
Posted by Bushana at 9/18/2013 07:46:00 AM No comments: 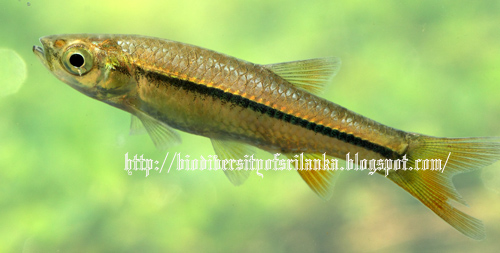 Common fish species distributed in lowland streams, rivers and paddy fields.  It can be easily distinguish from other Rasbora species by having narrow metallic blue dark lateral strip, which is somewhat hazy anteriorly and diffuse on the caudal fin base. Upper margin of dark lateral strip is distinct and lower margin hazy with slightly darkened scale pockets. Also the post-dorsal length, when carried forward falls anterior to the posterior border of the eye.
Posted by Bushana at 9/16/2013 07:26:00 AM No comments: 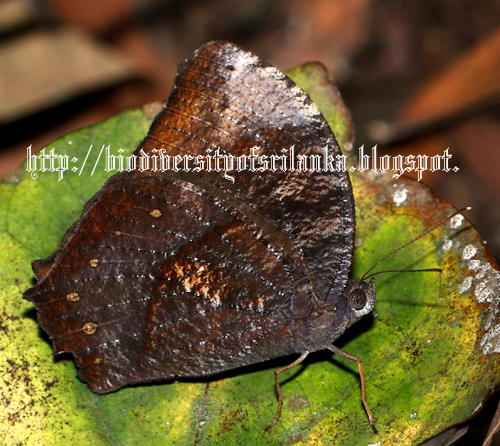 An uncommon butterfly occurs from lowlands to about 3500ft elevations, particularly in the wet zone.  It flies mainly in the late afternoon and settles in the undergrowth during the day time. Dark Evening Brown is seldom seen out of jungles or well wooded home gardens. It feeds on rotting fruits and usually seen under fruit bearing trees even during the day time.  Larval host plants are grasses and paddy.
Posted by Bushana at 9/14/2013 06:17:00 AM No comments: 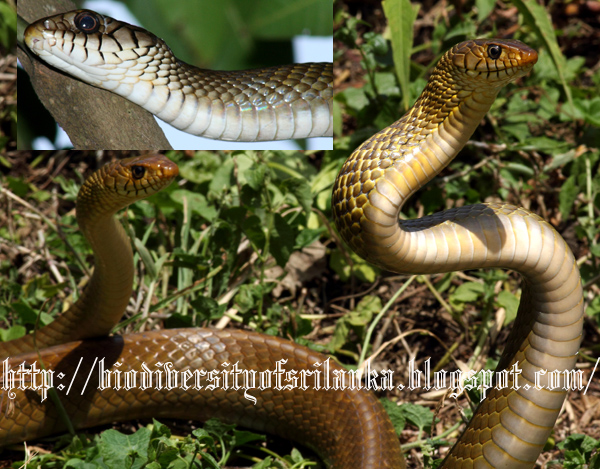 Rat snake is the second largest snake in the country with some specimens observed with 3000mm long while many exceed 2400mm in length (de Silva, Anslem & Jinasena Jayantha 2009). It is a widely distributed snake from sea level to higher hills including some off-shore islands in Jaffna peninsula (Somaweera R., 2006) while common in the low country and foot hills.  It is mostly living in anthropogenic habitats like home gardens, plantations and paddy fields since its main food frogs, toads and rats are abundant in such places. Other than that it feeds on lizards, birds, snakes, palm squirrels, bats etc.  Rat snake is active during the day time and it is mainly a terrestrial snake though usually climbs trees and roofs in search of its prey.  It is a non-venomous snake though may bite savagely when cornered. Its usual defense habit is raise its fore body and hissing like a cobra while sometime also produces a deep long groaning sound.  Rat snake ‘dances’ with two snakes raise their heads from the ground and bodies coiled around each other are often observed as shown in above picture too. It was earlier believed that it is a courtship dance of a male and a female but it is a combat dance by the males (de Silva, P.H.D.H, 1980) . Female rat snake lays 5-10 eggs in a termite mound and stays with the eggs coil herself around them. 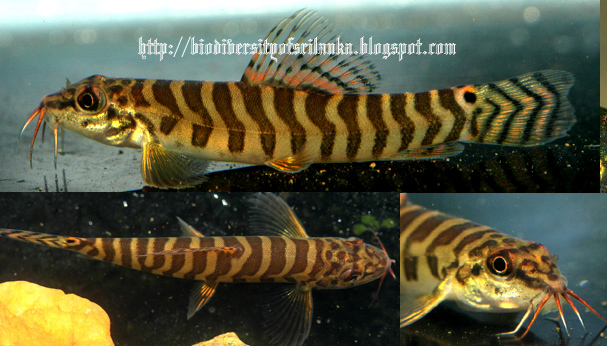 An uncommon fish restricted to the shallow slow flowing shaded streams with pebbles in South-western lowlands up to about 300m elevation. 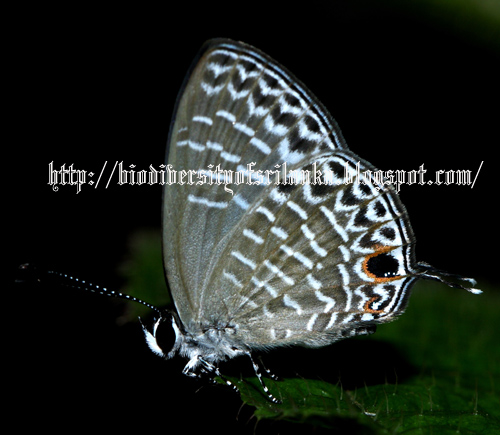 An endemic and rare butterfly found in the low country wet zone forests up to about 500m. Its larval host plant is Gal Karanda[ගල් කරඳ] (Humboldtia laurifolia)
Posted by Bushana at 9/08/2013 07:19:00 AM No comments:

Common venomous terrestrial snake found in anthropological habitats and plantations (Especially tea, coconut and rubber plantations) from coastal areas up to about 600m of the central hills. More abundant in the south-western wet zone than in the northern and eastern dry lands. However it appears to be absent in undisturbed forests in .  It is a nocturnal snake and during the day time rest under stones, logs and among leaf litter sometime with its head keep at an angle of 45 degrees to its body resembling a dry leaf. When  disturbed it flattened its body, forms it into ‘S’ shaped loops, often vibrates the tail and lashed out. Rapid tongue protrusion has been observed too.  It preys on skinks, shrews, geckos, frogs and rodents. Instances of feeding on reptile eggs and snakes are also observed. Merrem’s Hump-nosed Viper is responsible for the highest incidents of snake bites in (~27%) with occasional fatalities though its venom is considered as moderate.

Very common fish widely distributed throughout the lowlands of both wet and dry zones up to the higher hills. It is common in flowing water though occurs also in tanks, reservoirs and paddy fields.  Giant Danio is a mid-water fish and it forms medium size shoals.
Posted by Bushana at 9/04/2013 07:09:00 AM 2 comments:

Low-growing herb native to the . Introduced as an ornamental plant and cultivated in Sri Lankan home gardens, often in shade.
Posted by Bushana at 9/02/2013 07:31:00 AM No comments: