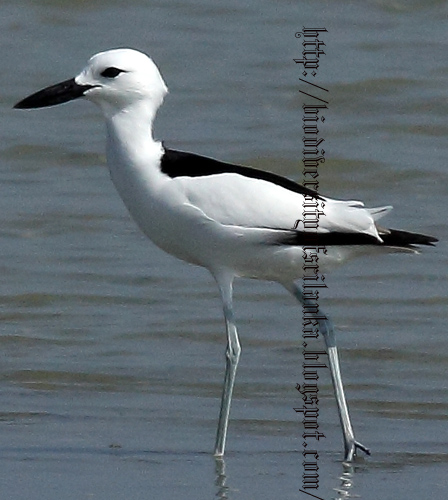 Rare and local breeding resident bird found in beaches, lagoons, estuaries, sandbanks and coral reefs on the north and north-western coast. Occasionally found in other dry coastal areas. It lives in solitary, in pairs or as small flocks. Its main food consists of crabs and probably other small marine animals such as sand-worms and molluscs captures while wading or waking along tide-marks of the seashore or in the shallow water of lagoons. The breeding season is from May to June and it dig a tunnel of 2-4 feet long into sand bank beside a beach and at the end hollow out a small chamber in which it lays a single egg.
Posted by Bushana at 2/27/2013 07:39:00 AM No comments: 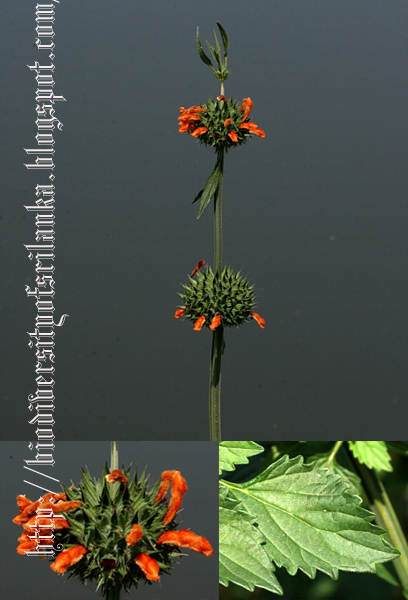 Maha-yakwanassa is a tall herb native to tropical , introduced to Sri Lanka and locally common in waste places, roadsides etc. in dry and intermediate zones from lowlands to about 400m. Flowering from November to June.
Posted by Bushana at 2/26/2013 07:40:00 AM No comments: 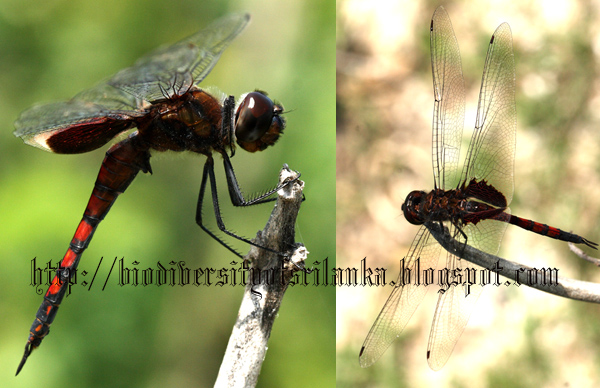 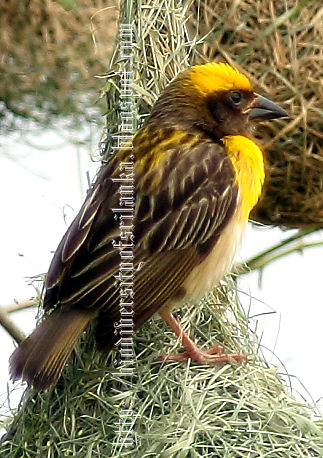 Common resident bird in the reed beds, paddy fields and marshy areas of the dry lowlands while local and uncommon in wet lowlands. It lives as large flocks. Baya weaver feeds on cultivated grains such as rice, Kurakkan, etc. and varies others seeds. It also takes insects to some extent. It breeds throughout the year in colonies. Male bird builds long pendulous nest usually overhanging the water.  Number of nests usually builds in a single tree where female bird lays 2-4 white eggs.
Posted by Bushana at 2/21/2013 09:19:00 PM 2 comments: 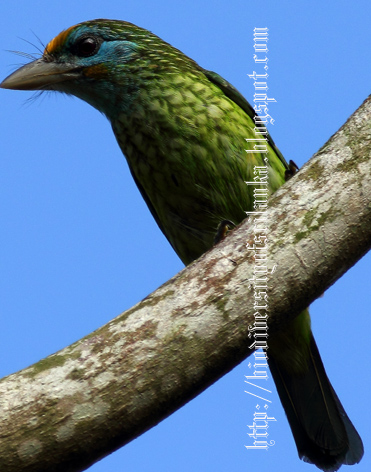 Locally common endemic bird of forests and well wooded gardens from wet lowlands to mid hills.  Also occurs but scarce in eastern foothills and higher hills. Yellow-fronted Barbet feeds mainly on fruits. The breeding season is from February to May and again from August to September though occasional nests sometimes found at other months of the year.  It lays two or three white eggs in a hole of a soft-wooded dead stem or branch of a tree pecked out by birds themselves.
Posted by Bushana at 2/19/2013 10:34:00 PM No comments: 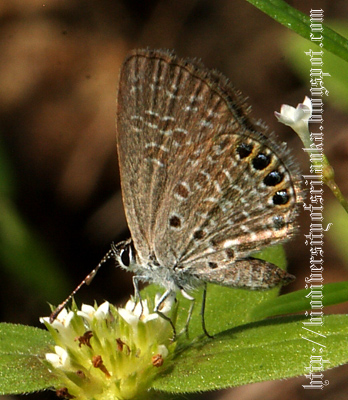 Grass Jewel is one of the smallest butterfly of the island common in grasslands and open areas in lowlands up to about 300 m. Its larva feeds on varies plants of the family Fabaceae and Boraginaceae.
Posted by Bushana at 2/17/2013 09:44:00 AM No comments:

Very common resident bird throughout the country while relatively uncommon in urban areas where House crow is abundant. It usually encounters as pairs or sometime as small flocks. Unlike House crow, Jungle crow is less dependent on man and sometime found in jungle areas remote from human habitations. Its food consists of both animal and vegetables subtances and also scavenges on carrions and human wastes. It place its nest which is a heap of twigs in a tall tree during April to September and lays 3-4 eggs.
Posted by Bushana at 2/15/2013 07:30:00 AM 3 comments: 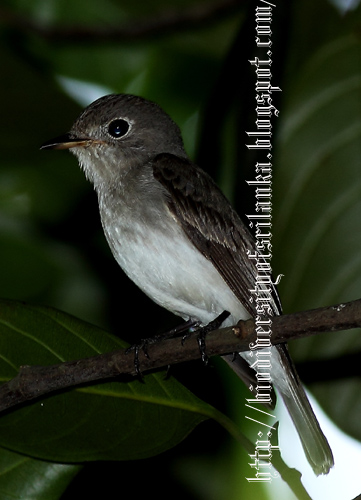 Very common winter migrant to gardens, plantations and open wooded areas from lowlands to mid hills. It is frequent in shaded locations with trees. Sometimes even in densely populated cities as long as such habitats available.  Asian Brown Flycatcher is superficially similar to another migrant Brown-breasted Flycatcher but can be easily distinguished by the dark grey color legs of this while it is flesh-color of the latter. While in it is mostly solitary bird and can be seen usually darting after small flying insects from a twig of a tree and often return back to the same perch or to a neighboring one with the captured prey on its bill, since it is very attached to its territory .
Posted by Bushana at 2/13/2013 07:21:00 AM No comments: 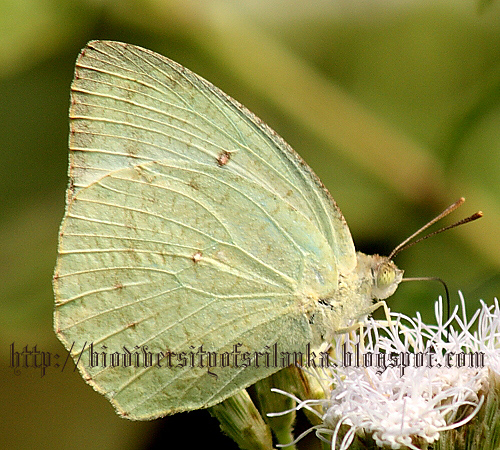 Common butterfly found in gardens and open areas, especially in lowlands and up to about 500m. It is a migratory species and during the migratory season (North East Monsoon period) it can be seen in all elevations of the island usually as swarms. It often use to settles on the underside of leaves so that it is difficult to distinguished it from the foliage. Also sometimes settles in swarms on damp earth to absorb minerals. Its larval food plant is common Peni Tora (Cassia occidentails) of family Fabaceae. It is now generally accepted that former African Emigrant (Catopsilia florella) is conspecific with C. pyranthe.
Posted by Bushana at 2/11/2013 07:52:00 AM No comments: 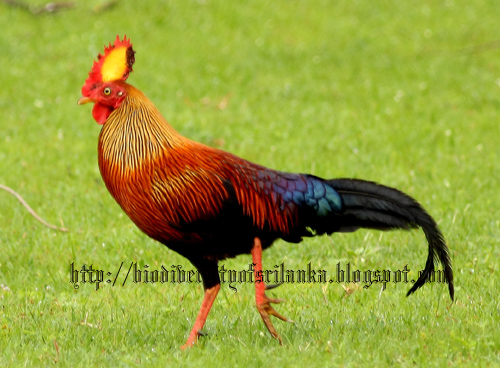 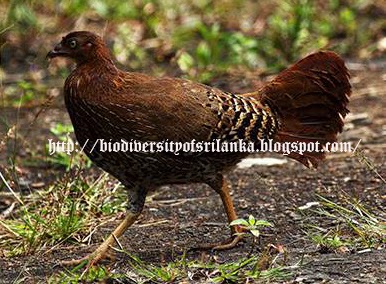 Fairly common endemic bird found in forests and dense scrubs from low lands to higher hills. Junglefowl keeps in pairs or small groups mainly inhabiting on ground and flying up to a tree when threatened. It roosts high in trees during night solitarily or in small groups. It’s food mainly consist of grain,  berries, leaves and buds as well as small insects such as grasshoppers, termites etc. Junglefowl 's  main breeding season is from December to April and probably again from August to September. The nest is a scrape in ground beneath a tree, beside a dead log or on a pile of vegetation.
Posted by Bushana at 2/09/2013 10:33:00 AM 1 comment: 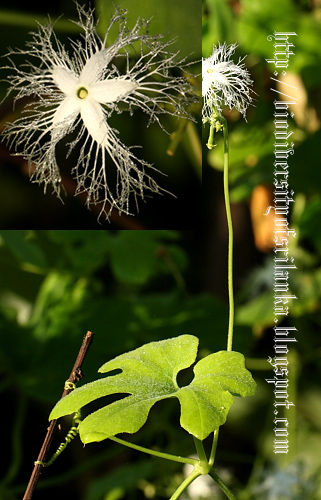 Common indigenous climbing herb grows in low country, mainly in dry zone. Trichosanthes anguina (Snake Gourd/Pathola) - cited as synonymy of T. cucumerina -  is a common cultivated vegetable with much larger fruits.
Posted by Bushana at 2/07/2013 07:15:00 AM No comments: 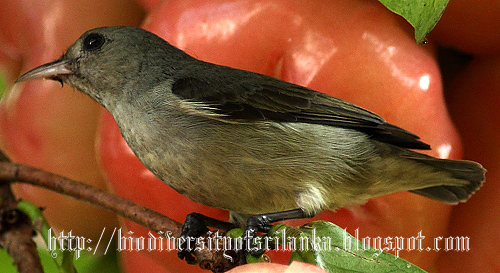 Very common breeding resident found all over the . Pale-billed Flowerpecker is the smallest bird of the island which frequents the canopy of tall trees and gardens, feeding on juicy fruits of many kinds while parasitic Loranthus species (Pilila) being its favorites  This bird helps to spread sticky seeds of Loranthus  by adhering them to the branches of trees. Beside fruits it also eats many small insects and spiders. The breeding season lasts from January to August and it build a nest – a small bag of cotton and fibers slung from a twig high up in a tree- placed among large leaves where it lays two white eggs.
Posted by Bushana at 2/05/2013 07:20:00 AM No comments: 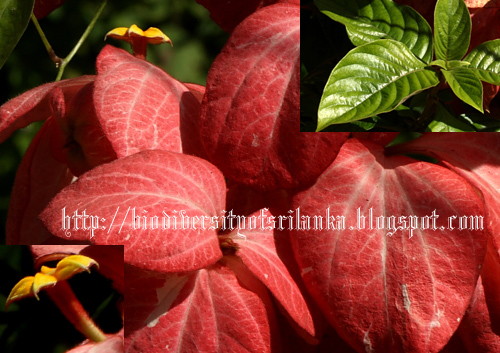 Mussaenda erythrophylla is an erect shrub introduced as an ornamental plant and widely cultivated in home gardens. It is said to have originated in the . Its pinkish sepals are more prominent than small yellow flowers (insert)
Posted by Bushana at 2/03/2013 07:19:00 AM No comments:

Common breeding resident in grasslands, scrublands and paddy fields in low country dry zone. Usually seen as pairs or solitary birds. Also not uncommon in suitable habitats in wet zone and hills like in tea plantation. It feeds on seeds, termites etc. picking up from the ground usually in the morning and evening. In this bird, the normal role of the sexes is reversed and female courts males uttering long purring call and she also practices polyandry. Having laid 2 to 4 eggs in a nest compose of dry grass, rootlets etc. in a hollow at the base of a small shrub, she leaves while her mate incubate them and bring up the chicks. The breeding season last for most of the year but most likely months are January to March and again July to August of the year.