A twining indigenous herb common in dry and arid zones of , often in disturbed vegetations.  It has greenish white flower with five petals flowering from February to September.
Posted by Bushana at 1/28/2011 05:27:00 PM No comments:

Spot-billed duck has been considered as a rare migrant till recent time.  But Ceylon Bird Club members were able to observe some breeding birds of this duck in Vankalai Ramsar wetland site recently and so it is now considered as a Breeding resident of Sri Lanka supplemented by migrant birds from India during the North-East monsoons .Migrant birds are earlier reported from tanks, paddy fields and marshes of Jaffna peninsula, Mahawelli flood plain national park and eastern sea belt. This duck can be distinguished from all other ducks by its colorful bill. Vankalei is a good site for observing this duck and above picture was taken while it was flying over the Mannar causeway.
Posted by Bushana at 1/25/2011 12:15:00 PM 4 comments: 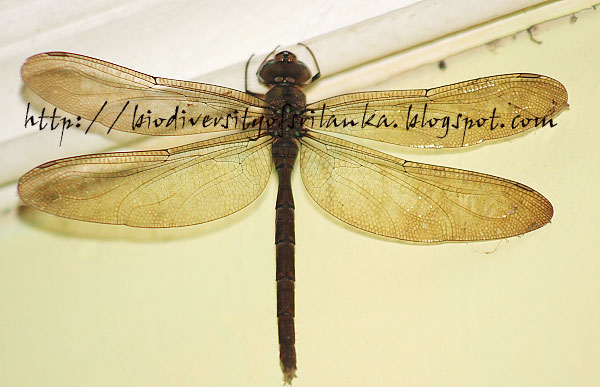 This rather uncommon dragonfly can be easily identified by a distinct constriction in its abdomen. It appears at dusk and come frequently to lights in houses though its usual habitats are tanks edges and marshlands where it flies rapidly during dusk and probably dawn as well. During day time they rest in shrubs overhanging the water surface.
Posted by Bushana at 1/22/2011 06:40:00 PM No comments:

daygecko is a recently described (Manamendra-arachchi, Batuwita & Pethiyagoda – Zeylanica - 2007) endemic gecko species of lowland wet zone forests. So far it is recorded from Kanneliya, Sinharaja, Beraliya, Kaluthara, Mathara, , Kottawa etc. It is diurnal in habit and usually found in large tree trunks.  It can be distinguished from other Cnemaspis species by having about 7 indistinct V-shaped markings on the dorsum and light yellow spot between two chevrons on the occipital region.
Posted by Bushana at 1/20/2011 07:22:00 AM 1 comment: 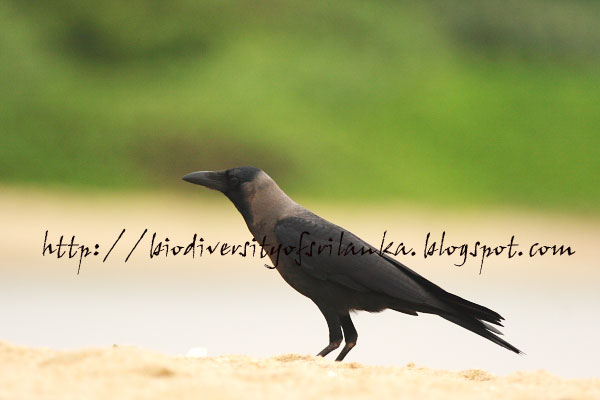 Very common breeding resident of all zones. Abundant in coastal and urban areas but never in thick forests.  It is omnivorous and scavenges on anything edible. In recent history uncontrolled garbage disposal has created an ideal condition for House crow to extend its habitats while threatening to survival of most other animals especially avifauna in most urban areas.  House crow roosts in large flocks in tall trees still remains in towns and it is a common sight of arriving crows from every direction at the dusk to such roosting places, sometime from very long distance of their day time feeding grounds.  The breeding season is from May to September and it builds a nest which is just a mass of twigs with the hollow lined with fibres.
Posted by Bushana at 1/16/2011 12:01:00 PM 2 comments: 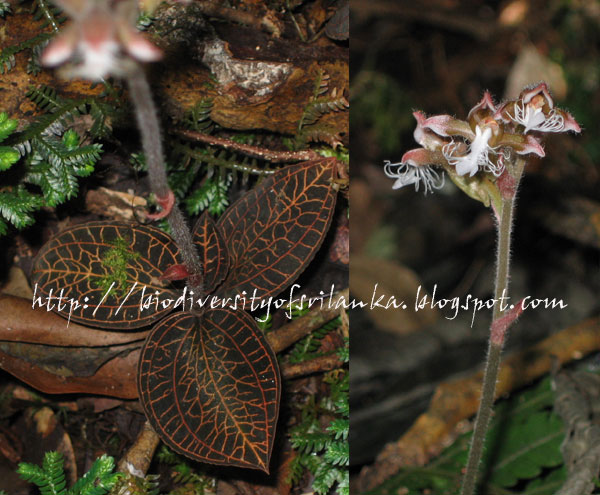 An endemic terrestrial orchid species grows in shade of trees among leaf litter in the tropical wet evergreen forests and subtropical montane forests (From 305m to1829m altitude). Flowering in January, May to September and December. Wanaraja is used for treating snake-bite poisoning in traditional Sinhalese medicine. It has been collecting extensively and illegally for medicinal as well as ornamental purposes. Therefore this orchid species has become rare in most places where it was abundantly occurred previously.
Posted by Bushana at 1/13/2011 05:14:00 PM 3 comments: 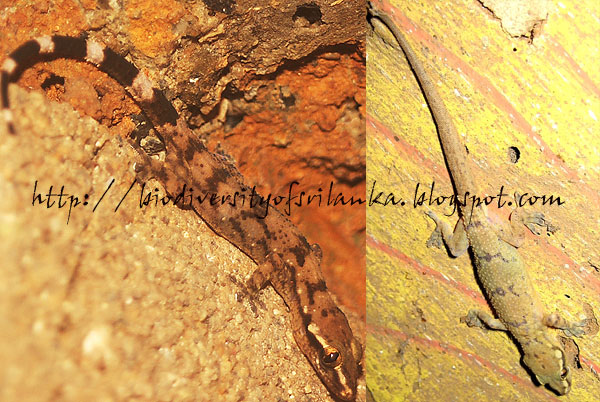 An endemic gecko with wide distribution in the island excluding higher altitudes and perhalf far north of the country.  Nocturnal and feed on insects. It inhabits on trees, rock crevices and sometime even in houses.  Lay two eggs in a  rock crevice or a tree hole.
Posted by Bushana at 1/11/2011 07:12:00 AM 2 comments: 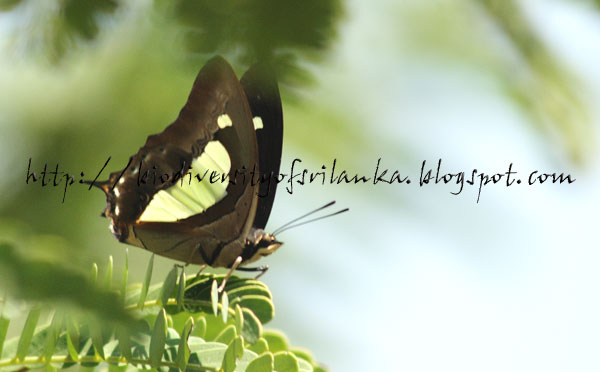 Common indigenous wader distributed in tanks, paddy fields and marshes of low country dry zone and less commonly in wet zone.  Usually found in pairs or as small scattered flocks.  To escape a danger such as attack of a hawk it dives and remain under water for some time clinging to under water weeds, while keeping only  its beak above the surface for breathing.  It feeds on water insects and such small animals, and also various kinds of vegetarian stuffs.  During breeding season which is from March to July it make a nest on top of a shrub growing in water and lay 5-8 eggs.
Posted by Bushana at 1/06/2011 05:31:00 PM 2 comments: 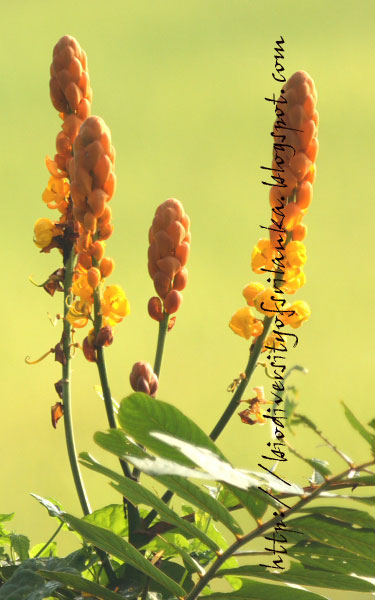 A native plant of tropical and introduced and cultivated in .  There are escaped plants grows in waste places, canal banks, tanks and paddy field edges etc. Use as a medicine for ringworm and hence the one of vernacular English name.
Posted by Bushana at 1/04/2011 07:06:00 AM No comments: 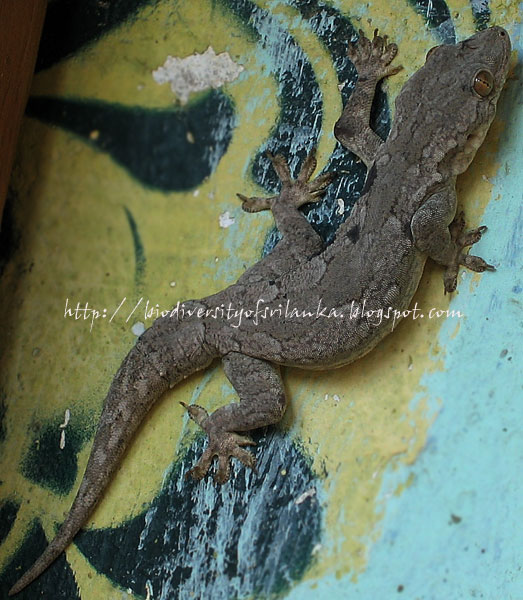 Comparatively large gecko from dry zone. It inhabits large trees (specially [Terminalia arjuna], rock outcrops and sometime even houses. It is diurnal in habit but mostly active during dawn and dusk.  Its main prey consist of insects though there are records of this gecko feeds on large animals like other geckos, skinks, snakes (Ruchira somaweera reported a instance where it was preying on a wolf snake (Lycodon striatus) – gecko (2) 2004 ) and mouse (from ).
Posted by Bushana at 1/02/2011 09:11:00 AM 4 comments: