Locally common damselfly from lowlands up to mid hills. Much common in the wet zone sea level. It can be distinguished from similar other species (P. microcephalum) by larger size (Abdomen about 32-33 mm and hind wing 20 - 22mm While it is 27-29 mm and 17-20mm respectively of P. microcephalum) and this one having goblet shaped mark on second segment with only a stem while other species has line running into the goblet shaped cup. 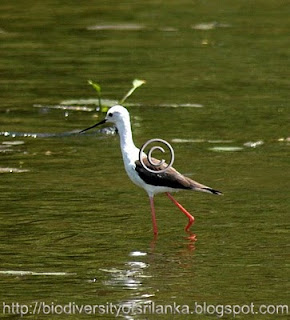 A resident bird of dry zone lowlands. It inhabits coastal mudflats, lagoons, marshes and inland tanks and also possible winter visitors to both wet and dry lowland water bodies. They breed from June to July usually as small colonies. Nesting is on the edge of a lagoon or tank or on a small islet. Nest is an usual depression in the ground sometimes lined with few rushes, water weeds or desiccated cow-pats. Food consists of mollusks, worms, aquatic insects and marsh plants. Usually feed as small scattered flocks and unite into a compact flock if disturbed. The long stilt-like legs enable it to reach food supplies normally out of reach for most other waders. 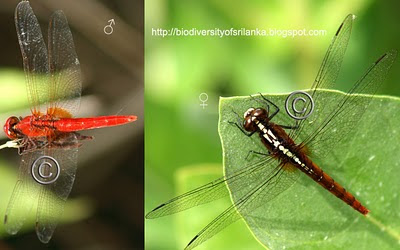 Brilliant scarlet red abdomen and thorax with no black markings of the male is the key to identify this insect from similar other dragonflies (Such as Scarlet basker). Sub adult males and females have a light yellowish mid dorsal stripe on segment 1 to 4. It is an uncommon dragonfly of lowland plains and breeds in weedy tanks, ponds, streams and channels while females hiding in surrounding jungle. 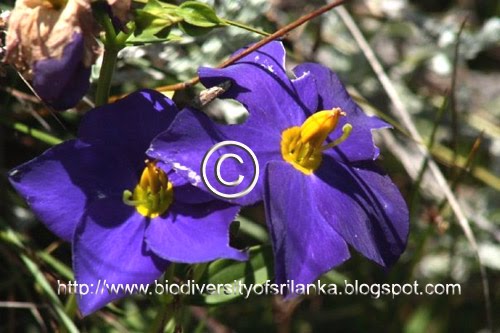 An endemic herb grows in moist places of the highlands mainly in southeastern part of the Central province. Common in Horton plains, Pattipola, Ambewela, Ohiya, Hakgala and Corbet’s gaps of knuckles range. Flowering from January to June and again in September to December. 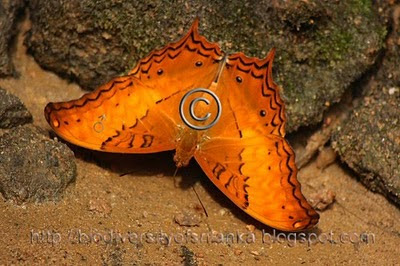 Cruiser can be found in forest areas of all over the island though can’t be considered as a common butterfly. It is much common from May to September months of the year. It is frequently found mud puddling on wet patches on gravel roads and usually bask high up on trees, time to time taking short flights and returning to the same spot. Sexes are dissimilar and great variation can be seen of dry and wet zone forms. Males of dry zone form are much smaller than wet zone form and not bright orange as of wet season form. Food plant – Adenia hondala (S: Hondala) and Modecca species. 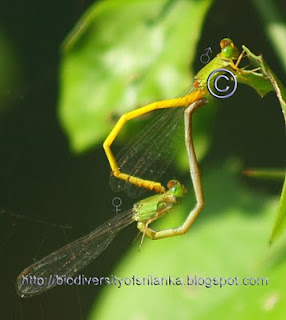 Very common damselfly recorded from all areas of the country. It is easily distinguished from other damselflies by having bright yellow abdomen of males. It breeds in weedy water and males can be seen in such habitats such as weedy tanks, ponds, canals, paddy fields…etc. Females live in shrub jungles some distance away from water bodies. 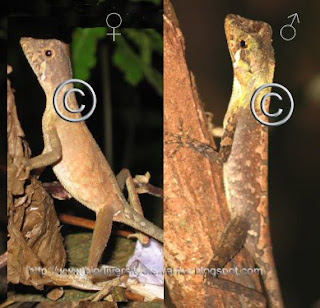 An endemic ground dwelling lizard confined to wet zone of the country (In forest areas from sea level up to 1300m). It inhabits on the leaf litter near forest streams. This lizard when disturbed may run bipedally (Rises on to its hind legs when running). That is the base for unusual name ‘kangaroo lizard’ for it. P.E.P. Deraniyagala mentions several Sinhalese names for this lizard – (Kala Katussa, Yak Katussa, Pinum Katussa, Thalli Katussa). Its diet consists of insects (Ants, Moths, Grasshoppers and Beetles), Spiders and occasionally plant materials such as tender shoots. 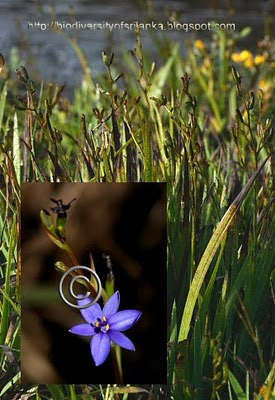 Native plant of southeastern Africa, South Africa, Uganda and Madagascar. Introduced to Sri Lanka and escaped from the Hakgala botanical garden and naturalized in patana lands and roadsides in only higher altitudes of Nuweraeliya district. Common around Hakgala and in patana lands of Horton plains. Flowers open early morning and close before noon. 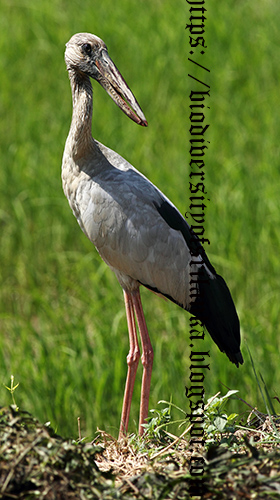 Smallest stork of Sri Lanka with a    characteristic bill which has a gap between mandibles when it is closed. Common breeding resident of marshes, tanks, paddy fields and lagoons. Much common in dry zone low lands where it met with singly or in small parties and flocks. However it has been observed that recently open bill had expanded its distribution range to the wet zone specially wetlands around Colombo such as Muthurajawela, Bellanwila and paddy fields of Western province. Its food  consists mainly of mollusks. Also eat crabs, frogs, fish and other small animals found in its swampy habitats
Its peculiar bill is obviously an adaptation to facilitate extraction of soft body of mollusks from the hard shell. Regularly soar on thermal currents on sunny days and can be seen flocks circling up to great height in sky. It is recorded that this stork brings bivalve mollusks to ashore and eat soft parts when valves open due to hot sun. Breeding season is from December to March and nest in colonies sometime up to hundreds or more in top of low trees by water.
Posted by Bushana at 7/09/2010 11:04:00 PM 7 comments: 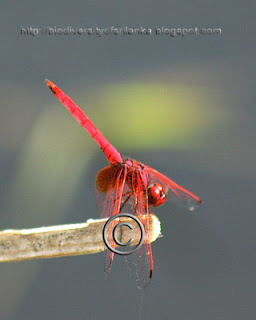 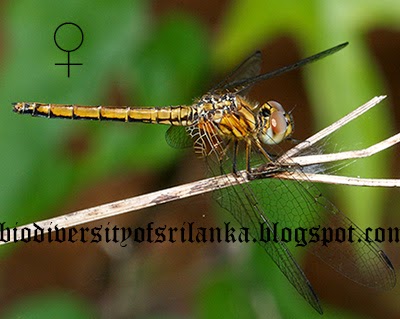 A common dragonfly of lowlands to submontane mid-hills. Prefer slow moving streams and channels to breeding rather than tanks and ponds. But adult males are not uncommon in weedy tank edges and river banks. Females and juvenile males resort to the surrounding jungles away from water bodies.
Posted by Bushana at 7/07/2010 10:33:00 PM 1 comment: 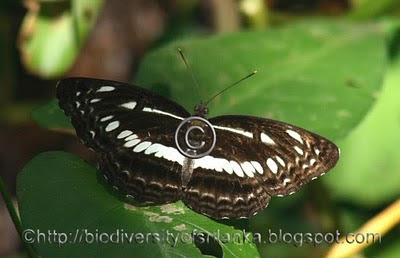 Common butterfly from sea level to mid hills of about 500ft. Usually it rest with open wings unlike most other butterflies. It joins in the migratory flights in large numbers. Larva feeds on plants of family Rhamnaceae and Malvaceae.
Posted by Bushana at 7/07/2010 09:45:00 PM No comments: 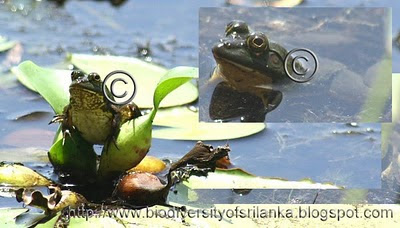 Purely aquatic frog widely distributed in lowlands water bodies such as ponds, marshes,rivers and tanks with aquatic vegetations. Highest attitude where this frog is recorded is Warnagala area near Kuruwita of peak wilderness sanctuary (760m). Sometime it can be seen inside domestic wells too. Dorsal surface bright green or mud brown often with pale yellow or creamy white lateral line. Female is large and grows up to 120mm in length while small males grow only about 58-87mm.
Posted by Bushana at 7/04/2010 11:05:00 PM No comments: 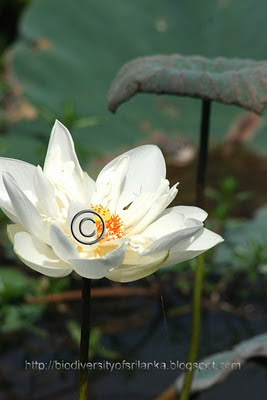 Aquatic indigenous herb of ponds and tanks of dry zone. Often cultivated in other areas. Flowering throughout the year but mainly during February to August. Flowers use as temple offering and rhizomes are edible and use also in medicine. Color of the flower varies from white to purplish pink.
Posted by Bushana at 7/04/2010 07:02:00 PM No comments: 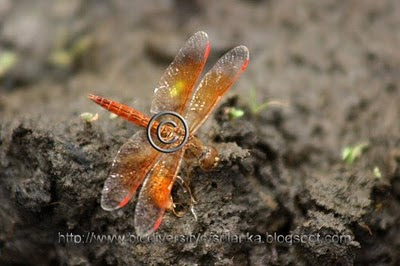 Very common dragonfly of slow flowing streams, weedy tank edges and marshes from the sea level to mid-hills. Abdomen – 19-20mm and Wings – 22-23mm. Female is lighter in color and much yellowish with clear wings contrary to male figured above.
Posted by Bushana at 7/04/2010 11:38:00 AM No comments: 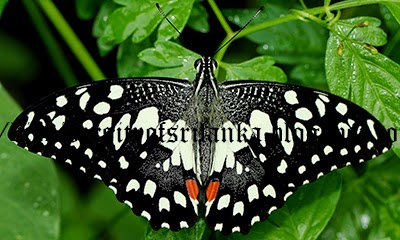 Common butterfly of all over the island below 1500ft throughout the year. It occasionally joins with migratory flight in great numbers and may then be seen at higher elevations. Larva feed on various plants of Rutaceae family such as Diwul[දිවුල්]/Woodapple (Limonia acidissima), Dehi /Lime (Citrus auruntifolia, Citrus limon), Beli (Aegle marmelos…etc.
Posted by Bushana at 7/04/2010 11:09:00 AM No comments: