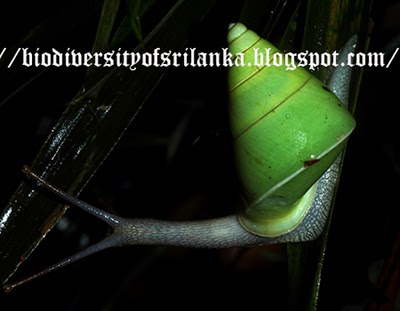 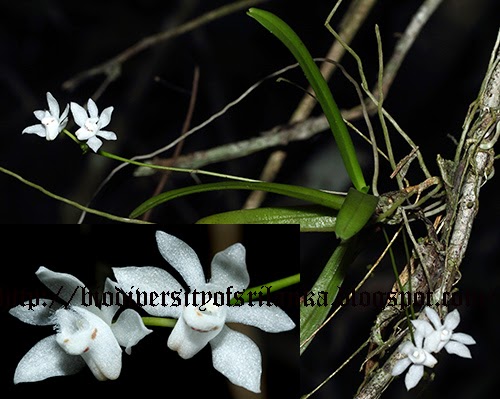 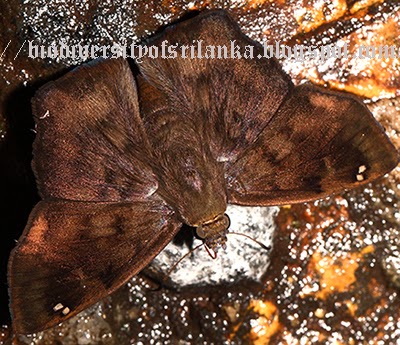 "A great rarity, and I have never personally caught a specimen. A native collector has sent me specimens from Kandy, Deniyaya and Kottawa" - Ormiston W., 1924

Above male specimen was photographed at Gileemale forest reserve in mid April.
Posted by Bushana at 4/26/2014 04:06:00 AM No comments: 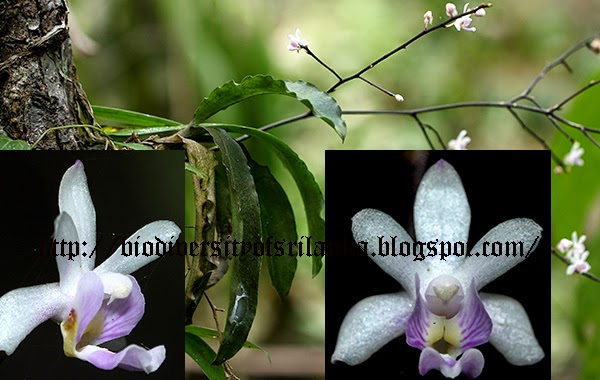 Rare Epiphytite, on trees in the lowland wet zone forests up to 305m a.s.l. Flowering September.

Blossom krait is a rear-fanged mildly venomous terrestrial snake found among leaf litter in forests of low country to central hills.  Also occurs in knuckles range. It feeds on frogs, skinks, and insects. Blossom krait is rather uncommon snake endemic to the Sri Lanka .
Posted by Bushana at 4/22/2014 07:22:00 AM No comments:

Birds that appear outside their normal range are known as vagrants. This post listed up to date published sight records of vagrants of the family Anatidae (Ducks) in Sri Lanka.

1) Fulvous Whistling-duck (Dendrocygna bicolor)
First reference of its occurrence in Sri Lanka is from Wait (Wait W.E., 1931:447). He noted about few specimens once obtained near Mannar and a single sight record from Balapitiya in Southern province. He further noted that he had been told of a sighting of it near Giant’s tank (Wait W.E., 1931:447). C.E. Norris wrote in 1951 that Fulvous Whistling Duck has been recorded as a breeding resident though not recent reports have been received regarding its status. And he suspected that it may still breeds on some of larger tanks and has been overlooked (Norris, C. E., 1951). There is an unconfirmed report of a small flock in Wilpattu National Park in 1962 (Savage, C. D. W. ,1968) and another sight record at Andankulam tank near Tricomalee in the last week of February 1967 (Phillips W.W.A, 1978:11). Some recent sight records of it are
1) Single bird at Bellanwila-Attidiya on December 1990 (Hoffmann, T. W., 1991),
2) Single bird at Ridiyagama on December 1992 (Hoffmann, T. W. , 1993)
3) Two birds at Wilmitiya tank on March 1995 (Hoffmann, T. W., 1996)
4) Two ducks counted during 15th annual waterfowl census conducted in January 1998 (Hoffmann, T. W. 1998)

2) Greylag Goose (Anser anser rubrirostris)
Single specimen of small, young male procured by then museum collector in March 1922 from a paddy field about 6 miles from Kesbewa of Colombo district is the only instance of its occurrence in Sri Lanka. It was feeding with two others at the time (Wait W.E., 1931:444). Phillips noted of "non authenticated sight records during recent years from Hambantota and Jaffna areas of parties of Geese". Those he believed as possible vagrants of either this species or Bar-headed goose (Anser indicus) (Phillips W.W.A, 1978:11)

6) Mallard (Anas platyrhynchos platyrhynchos)
In his monograph on Sri Lankan birds Vincent Legge had added a note on Mallard stating– “I have sportsman’s authority for the occurrence of the Mallard (A.boschas, Linn.) in the Jaffna district; but I am inclined to think that the Indian Wild Duck has been mistaken for it” (Legge 1880: 1426). W.W.A. Phillips also included it in his article supplied to Loris volume 4 on ducks, stating that it is possibly a rare winter straggler to some of the coastal lagoons in the West and South (Phillips, W.W.A., 1948) though he excluded it from his annotated checklist of the Birds of Ceylon (Phillips W.W.A, 1978). Kotagama S. & Ratnavira G. noted a recent sight record of a single bird at Kalamatiya on 19th January 1986 (Kotagama S. & Ratnavira G. 2010: 160 quoting CBCN 1986, Jan: 04). However CBC listed it in their Appendix 1 (http://www.ceylonbirdclub.org/Appendix-I.pdf) under the criteria ‘It is likely to occur as a migrant in Sri Lanka, and is reported with sufficient detail, but also could be of domesticated or captive origin in Sri Lanka’

7) Marbled Teal (Marmarnetta angustirostris)
Three unconfirmed but independent reports of sightings in January 1984 are the only record of occurrence of Marble Teal in Sri Lanka (Hoffmann, T. W., 1985a) & Hoffmann, T. W., 1985). The first was reported from Deberawewa and Bundala area, second from the Chilaw and the third again from Deberawewa. In all three cases observers were not familiar with the duck and looked it up in guides and came to the conclusion that it is this duck. In the first instance the identification was confirmed by a foreign visitor familiar with the species(Hoffmann, T. W., 1985a). CBC has listed these sight records under Appendix 2 of its country list (http://www.ceylonbirdclub.org/Appendix-II.pdf)) under the criteria of the reports ‘lacks sufficient diagnostic detail or, where necessary, sufficient comparison with ‘confusion’ species or subspecies; and there is therefore doubt as to the identification of the bird concerned’.

8) Red-crested Pochard (Netta rufina)
Base on Layard’s information Legge doubtfully added this species to his list. According to the Legge, Layard has observed two or three pairs through his telescope for several weeks on a piece of brackish water between Jaffna and Chavagacherry. Layard also got a confirmation from a native by showing a head of F.rufina (i.e. N.ruffina) which he received from Calcutta. It was identified by that native as a bird which he is familiar with and had killed on that very piece of water though he had not seen them elsewhere.  Layard had also written to Legge subsequently that he is sure he identified the bird correctly (Legge V., 1880: 1428-1429). Layard’s observation was made in 1854 and later on it has certainly been seen at Hambantota (Savage, C. D. W., 1968 & Phillips, W.W.A., 1948)

9) Common Pochard (Aythya ferina)
Vincent Legge noted this species as a likely to occur one in Ceylon based on information he received from the Varian of the public work department. A duck with “Canvas-back” which Varian had shot on Topoor tank may have been a Common or red-headed Pochard (Anas ferina) according to the Legge. (Legge V., 1880: 1430).  Other than that up to date no other observation of it has been reported in Sri Lanka. 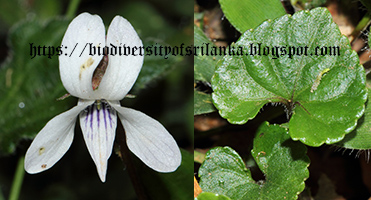 An indigenous prostrate herb common in montane zone. Flowering most of the year. 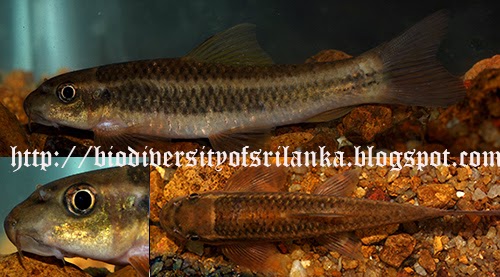 An endemic fish found in fast flowing streams throughout the island, particularly in the wet zone. Adult Stone Suckers are bottom dwelling fish and stay clinging to rocks using its suckers while juveniles are found in all levels of the water column till their suckers are fully developed. It is often found in rock pools of streams rather than water streams with sandy substrates. It is said that Stone Suckers ascend small rocky streams to breed. 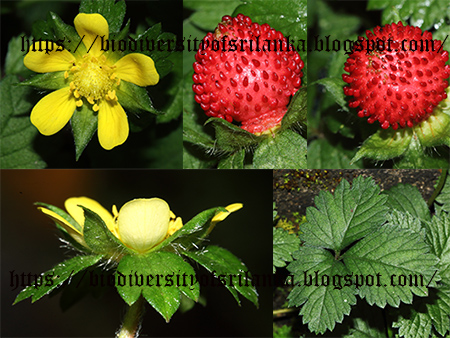 An introduced herb with prostrate stems, found along roadsides and disturbed habitats in montane zone. Native plant of Eastern Asia. Strawberry like small fruits are scarlet red when ripe. Flowering and fruiting from December to February. Common in Horton plains.
Posted by Bushana at 4/12/2014 07:24:00 AM No comments:

An endemic damselfly inhabiting stream habitats of wet zone rain forests. Rather uncommon insect though relatively common than other forest damsels.
Posted by Bushana at 4/10/2014 07:02:00 AM No comments:

Rounded and mound like shrub or small tree grows on shores and occasionally somewhat inland areas.
Posted by Bushana at 4/08/2014 02:10:00 PM No comments:

Large 4-Lineblue is a rare butterfly found in forests and well wooded areas of all elevations up to the higher hills. No records available on its food plant or early stages of the life cycle.  It is the only Nacaduba species of the island in which antennae are white-tipped and also the largest of them.

A native branched shrub growing rain forest understory of the wet zone. Leaves chewed with betel.
Posted by Bushana at 4/04/2014 07:10:00 AM 2 comments:

Climbing Perch is a common fish inhabiting tanks, ponds, swamps, streams and some time even in lakes which have connected to the sea. It is distributed in both wet and dry lowlands. Climbing Perch is one of the most hardy fish which can survive in extremely unfavorable water conditions and it has been recorded that they can travel certain distance overland from one water body to another. However tree climbing habit attributed to this fish by some authors is not reliably observed. As per Deraniyagala it visits newly sown paddy fields at night to feed on the grain (Deraniyagala P.E.P., 1952). It feeds on macrophytic vegetation, fish fry and shrimps (Pethiyagoda, R., 1991).
Posted by Bushana at 4/02/2014 07:34:00 AM 3 comments: