Common insect flies all over the island throughout the year. Plentiful in dry zone and scarce in higher hills. It take part in migrations. Brown King Crow's food plant in larval stage is Kota-dimbula (Ficus hispida) of family Moraceae and probably of other ficus (Nuga) species. Brown King Crow is mimicked by female of the Great Eggfly, both sexes of Common Palmfly and Common mime.
Posted by Bushana at 5/30/2012 07:33:00 AM 2 comments: 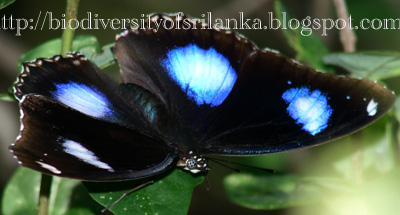 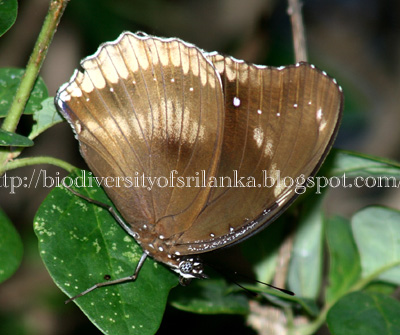 Great Eggfly flies all over the island particularly in forested areas. However it is common during the north east monsoon period. It takes part in migrations. Larva feeds on Nelu (Strobilanthes spp.), Elatostema acuminatum and Wal-kahabiliya (Laportea interrupta) plants. 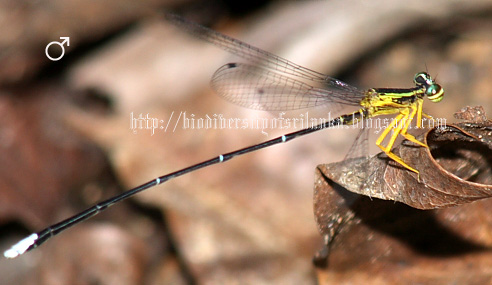 Very common insect found in reeds and marshy vegetation of forest streams and ponds from lowlands to mid-hills.
Posted by Bushana at 5/26/2012 06:38:00 AM No comments: 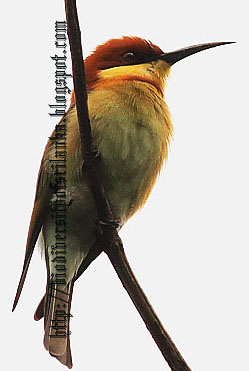 Rather local breeding resident than uncommon, found in forests and open areas with trees from lowlands to mid hills. It lives as pairs or small flocks. Its food consists mainly of flying insects.  It has been observed that this Bee-eater is diving into the water like kingfishers but whether it is to catch water insects/fish or it merely take a ‘plunge bath’ is uncertain. It dig a burrow into an earth bank with the end enlarged into a spherical chamber and lays 3-4 eggs during March to May.
Posted by Bushana at 5/23/2012 10:48:00 PM 4 comments: 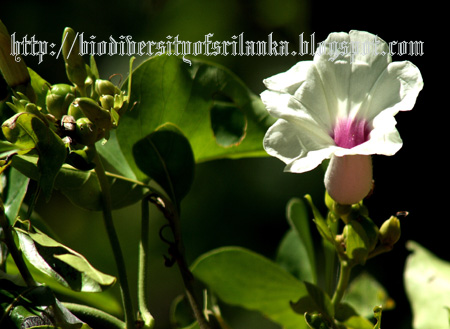 An endemic and very common liana often growing over garden fences and along roads in the wet zone. Fruit a yellow berry are occasionally eaten by some people.  Flowering from March to June.
Posted by Bushana at 5/22/2012 07:28:00 AM 6 comments: 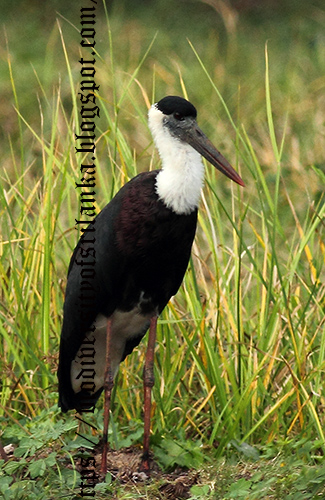 An uncommon breeding resident inhabiting tank edges, marshes, open grasslands, paddy fields etc. of low country dry zone. Usually seen as pairs though large aggregation of birds can be occurred when large water bodies are drying up. It feeds on fish, frogs, snails and insects such as large grasshoppers and some water insects. It breeds in February to March. The isolated nest (Unlike breeding colonies of some other storks and herons) is a large mass of sticks place high in a tree in the heart of the jungle.
Posted by Bushana at 5/20/2012 08:53:00 AM No comments:

Due to the lose of habitats and of extensive poaching, nowadays Spotted deer is confined to the protected national parks and forest reserves of the dry lowlands.  It lives as herds of few individuals to a hundred or more.  These herds mostly have single dominant male while some large herds may have several sexually matured stags. Only the males of spotted deer develop antlers and young stags shed antlers annually but later in life the shedding occurs irregularly.  They feed in grasslands in the morning and evening, resting during the heat of the day in the shade of trees.  Man, leopards and occasionally crocodiles and pythons are the enemies of the Spotted deer while jackal also kill fawns and injured animals. It feeds mainly by grazing on grasses though occasionally browse on low hanging branches and also very fond of the fruits and flowers  that falls from the trees.
Posted by Bushana at 5/18/2012 06:54:00 AM 2 comments: 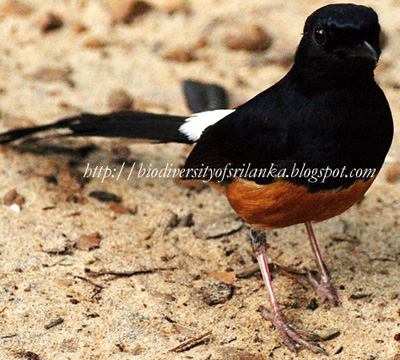 White-rumped Shama  is a common breeding resident of jungles from lowlands to mid hills. It is fairly common in dry lowland forest areas and uncommon and locale in wet zone forests. Shama feeds on insects and probably jungle berries. It lives as pairs and  breeds from March to May . The nest is a pad of fibres placed in a tree hole where it lays 3 or 4 eggs.

Hala Kimbula is a freshwater crocodile inhabiting tanks, rivers, villus, reservoirs and also sometime in saltpans of dry lowlands.  Mugger Juveniles feeds on insects and small vertebrates such as fish and frogs while adults hunt mammals as large as deer as well as small mammals, water birds, fish, turtles, snakes etc. It is said that when capturing fishes it remains with its jaws open until one swims by and then seize with a snap (Deraniyagala P.E.P. 1939). Occasionally it attacks humans. It aestivate in the jungle during the drought until rainy season comes. It is estimated that total population of Mugger in is perhaps around 1200 individuals (Das Indraneil and de Silva Anslem 2005)
Posted by Bushana at 5/14/2012 07:38:00 AM No comments: 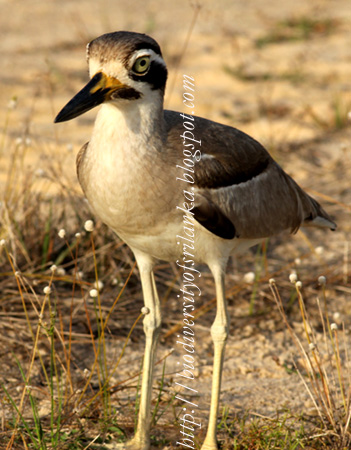 Great Thick-knee is an uncommon breeding resident in the dry lowlands. It inhabits large tank edges, lagoons and estuaries. It is nocturnal and crepuscular in habit while resting in open areas during the day time. Usually it encounters as pairs or small flocks. It feeds on insects, crabs, worms and mollusks. Breeding season lasts from January to August  and  lays one or two eggs on ground generally not far from water.
Posted by Bushana at 5/12/2012 07:44:00 AM No comments:

It is believed that wild buffalos now inhabiting in the dry zone forests and grasslands are decedents of feral domestic stock that have gone wild with the abandonment of Anuradhapura and Polonnaru kingdoms, since no wild buffaloes are to be found in the south of central provinces of Indian mainland. Above theory further says that it was originally imported from plains of Ganges by ancient Sinhalese for the agricultural purposes. Buffalo of true wild state nowadays found only in remote dry zone areas such as Yala and Wilpattu national parks, while in other areas it easily mix and mate with feral populations. Herds seen in grasslands are compose entirely of cows, their carves and young bulls while old and sexually matured bulls lives solitarily in its own demarcated territory defending it from other intruder bulls.
Posted by Bushana at 5/10/2012 07:36:00 AM 1 comment: 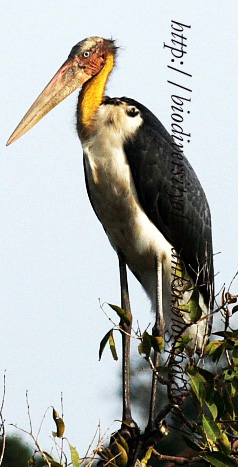 A globally threatened rare breeding resident found in marshes, ponds, tanks and villus usually in or vicinity of dry lowland jungles. Lesser Adjutant is the largest bird of . It feeds on frogs, crabs, fish, lizards, small mammals and snakes stalking on dry edges of water usually as individual birds. But sometime small groups can be seen around drying water bodies. Unlike most other storks it flies by holding its neck drawn backward between the shoulders. Although it is confirmed as a breeding resident of nest has rarely been found though juvenile birds are seen during and after its breeding season which happen to be March to April and again September. Nest is a huge file of sticks place on a big tree.
Posted by Bushana at 5/08/2012 08:23:00 PM No comments: 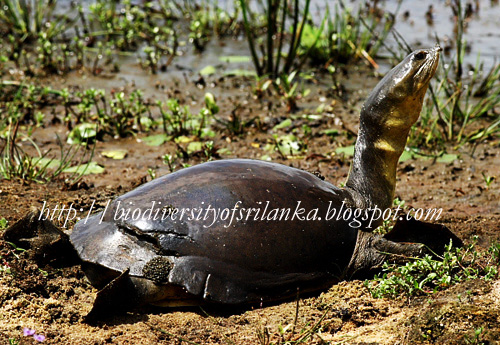 Kiri Ibba is a common turtle from lowlands to mid hills up to about 1200m. It inhabits paddy fields, rivers, salt marshes, tanks, ponds and even canals in some urban areas. It feeds on frogs, fish, crabs, snails, worms, insects and water plants. Flapshell turtle also scavenges on dead animals. One of the major threats to it in is killing large numbers for food.
Posted by Bushana at 5/07/2012 10:15:00 PM No comments:

Common breeding resident of the low country dry zone. Local and uncommon in wet lowlands. It lives in pairs and inhabits open country such as paddy fields, scrublands etc. Jerdon’s Bushlark has a remarkable courting behavior of parachuting down with wings open and legs dangling after rising about 20-30 ft in the air. It feeds on several ground insects like grasshoppers. Unlike the Oriental skylark, Jerdon's Bushlark often perches on bushes, fences, dead tree branches and such places and utters its song. Breeding season is from March to July and it builds a well concealed nest in a small hollow at the base of a tussock of grass and lays 2-3 eggs.
Posted by Bushana at 5/05/2012 05:31:00 AM No comments: 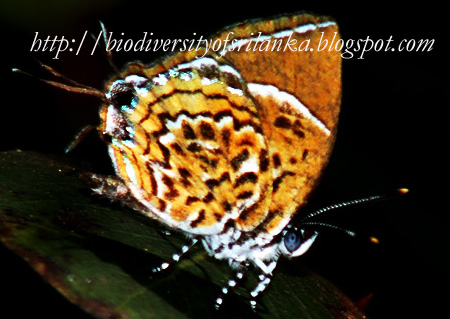 An uncommon butterfly found in most part of the island up to about 1000m asl. However it is much plentiful at low country forested areas. The larva feeds on buds of Rathmal flowers (Ixora coccinea of family Rubiaceae), Immature leaves of බෝ-කෑර/ගෝ-කෑර [Bo-Kera] (Gomphia serrata) and shoots and flowers of Rat-Beraliya (Hopea sp. of family Dipterocarpaceae). 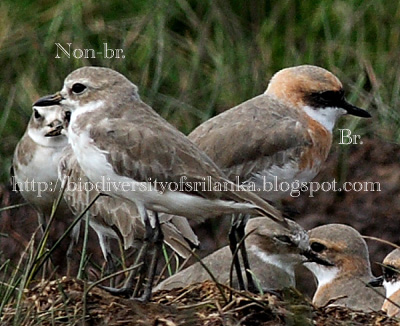 Common winter migrant to the lowlands while more common in dry zone and locale in the wet zone. It feeds on small insects and crustaceans in shores, salterns, mud-flats, wet grasslands etc. as small to large flocks. Lesser Sand Plover breeds in .
Posted by Bushana at 5/02/2012 07:22:00 AM No comments: