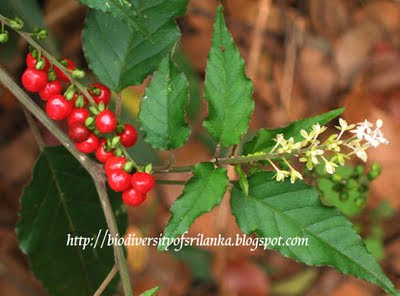 Native herb of tropical . Introduced and naturalized widely in other tropical areas including where it is distributed in roadsides, wastelands and forest edges especially of hill country.
Posted by Bushana at 7/31/2011 07:20:00 AM No comments: 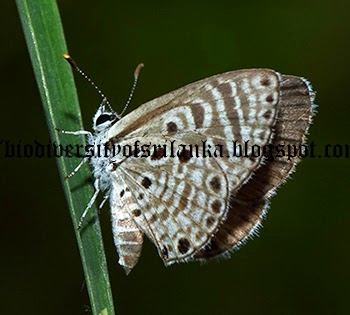 An uncommon butterfly of lowlands below 300m a.s.l. Much common in the dry zone and mostly appearing during the dry season of the year.  It is usually found settling at the end of a twig or thorn of a tree. It flies close to the ground and much fond of roadsides of the open areas or shrubs rather than jungles.  Food plants are Acacia species such as Acavia leucophloea (Katu Andara) and Acacia nilotica. African Babul blue also flies in , and . The larvae are attended by ants (Woodhouse L.G.O. The Butterfly fauna of 1950)
Posted by Bushana at 7/29/2011 07:39:00 AM No comments:

Native plant of . Introduced and naturalized along roadsides and waste lands of low country and also cultivated in home gardens as an ornamental plant. Flowers open at about and close before . Hence the vernacular name. Flowering occurs all the year round.
Posted by Bushana at 7/27/2011 07:48:00 AM 1 comment:

A common house gecko distributed throughout the country excluding higher altitudes.  It can be distinguished from other species of the genus by 3 longitudinal rows of irregular dark brown spots which are smaller than eye and broken brown lateral band extending from snout to ear.  Dorsal surface of the body got tubercles. It prey on insects and also rice and such man-made foods. Cannibalism has been observed among them and territorial fighting are also common where aggregation of more individuals are occurred such as lampposts where insects are abundant during the night. However it is usually found as pairs or sometime as small groups.
Posted by Bushana at 7/25/2011 07:34:00 AM No comments: 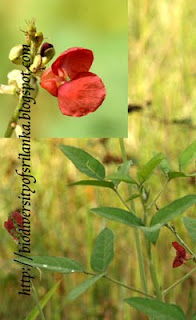 An introduced weed common in low country waste lands and road sides. Native herb of tropical . It flowers throughout the year.
Posted by Bushana at 7/23/2011 07:25:00 AM No comments:

Very common dragonfly of tanks, ponds, paddy fields and marshes from low country to mid-hills.
Posted by Bushana at 7/21/2011 07:29:00 AM No comments: 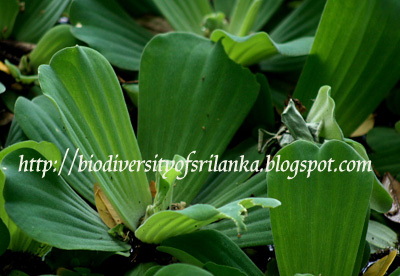 Common floating herb found in low country tanks, ponds and rice fields. Occasionally found also in brackish water ponds.  Native plant of and introduced to other tropical countries including .
Posted by Bushana at 7/19/2011 09:04:00 PM No comments: 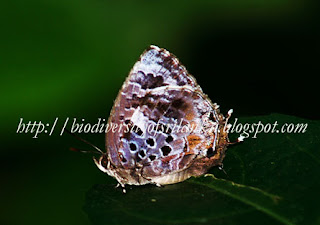 Aberrant Bushblue is one of the rarest butterflies of though scattered records available from all elevations of the country. Here are some comments made by three pioneer authors on Sri Lankan butterfly on distribution of the Aberrant Bushblue.
“I have never taken this personally, though, when fishing at Ambawella(6000ft) a small Amblypodia, settled close to me, which was either this or a new species. It is not very rare in the Hills above Ratnapura, and has been taken in ” – Ormiston W. The Butterflies of 1924
“It has not been captured for many years now, but Ormiston(1924) records…….” – Woodhouse L.G.O. The Butterfly fauna of 1950
“This is a very rare butterfly, the only specimens I have seen being in the (Natural History)” – D’Abrera, Bernard, The butterflies of -1998

No records available on its food plant or early stages of the life cycle.
*Above picture was taken at one of the remaining wet lowland forest patch of Gampaha district. It is highlighting the necessity of immediate actions to conserve these places with high biodiversity.
Posted by Bushana at 7/18/2011 08:17:00 AM 6 comments: 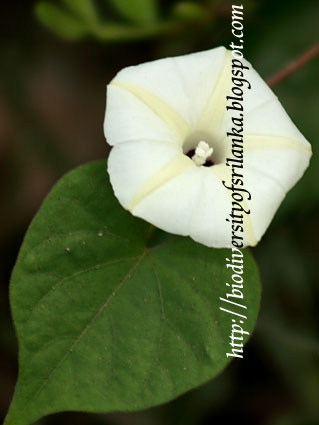 An Indigenous vine found along roadsides, waste lands, forest margins and sometimes on sandy beaches, both in wet and dry zones.
Posted by Bushana at 7/17/2011 08:40:00 AM 2 comments: 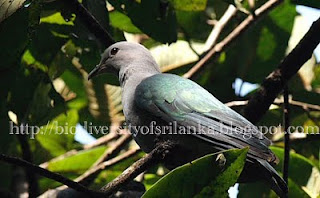 Largest pigeon of the island and a resident of forests from lowland to lower hills. Usually found in upper canopy. Living as pairs or as small flocks (especially during fruiting season of varies trees). It is arboreal and feeds on fruits mainly in the morning and again in the evening.
Posted by Bushana at 7/15/2011 07:32:00 AM 9 comments: 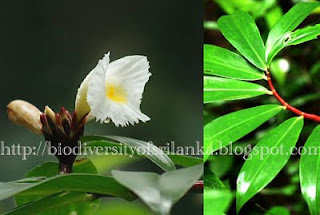 An indigenous herb of about 2-3m height found in shady places of the low country. Roots use in traditional ayurvedic medicine to cure catarrhal fevers, coughs, dyspepsia, worms and skin diseases (Medicinal plants used in Ceylon part5 – D.M.A. Jayaweera).  Leaves edible and there is a popular belief that it can reduce the sugar level of the blood and hence good for diabetics patients.
Posted by Bushana at 7/13/2011 10:40:00 AM 16 comments: 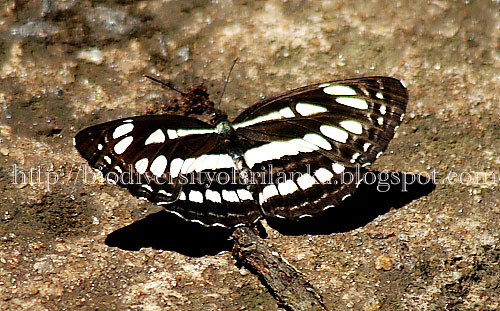 Very common butterfly flying throughout the year and abundant in everywhere of the island. It takes part in migrations. Larva feeds on varies plants of Fabaceae, Malvaceae and Tiliaceae such as Wanduru or Lee Me (Vigna unguiculata) and Awara (Canavalia gladiata)
Posted by Bushana at 7/11/2011 07:27:00 AM No comments: 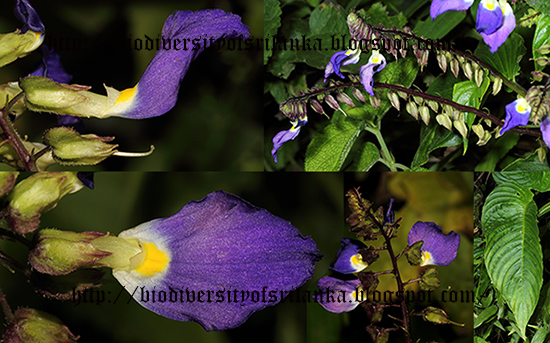 An indigenous herb found in moist montane forests of hill country. Usually along streams and forest paths.
Posted by Bushana at 7/08/2011 10:07:00 PM No comments: 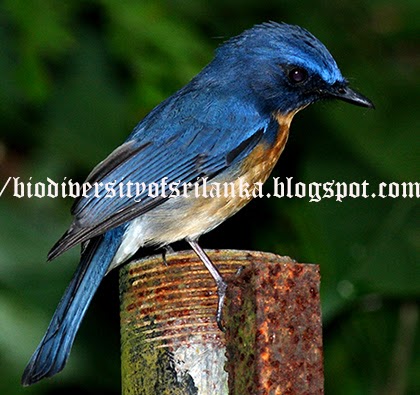 Common breeding resident of forests and heavily shaded habitats of home gardens and cultivations of all climatic zones of the island.  Frequently found along streams and it is very active especially toward dusk.  It is not much shy and usually flits among the undergrowth in search of its prey which mainly consists of small flying insects, often captured on the wing.
Posted by Bushana at 7/07/2011 07:43:00 AM No comments:

A large shrub native to introduced and cultivated in Sri Lankan home gardens. Flowering throughout the year.
Posted by Bushana at 7/05/2011 07:36:00 AM No comments: 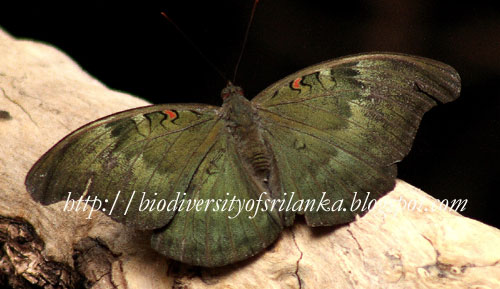 Rather uncommon butterfly found in low country dry zone, often close to streams and rivers. According to the Woodhouse it is fairy common from January to March (Woodhouse L.G.O. The Butterfly fauna of 1950). Food plant – Kaluwara(Diospyros ebenum).
Posted by Bushana at 7/02/2011 05:11:00 PM 10 comments: 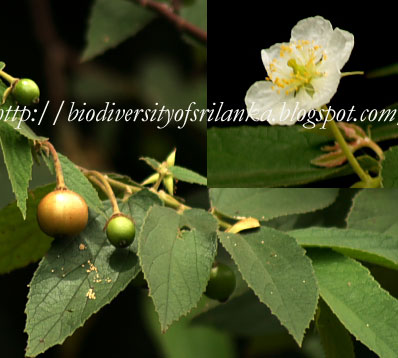 Small tree native to . Introduced and cultivate in home gardens, and also naturalized along forest edges. Fruit edible. Flowering and fruiting occurs throughout the year.