Birds that appear outside their normal range are known as vagrants. This post summarizes up to date published sight records of vagrants of the family Motacillidae (Wagtails and Pipits) in Sri Lanka.

2) Olive-backed Pipit [Indian Tree Pipit] (Anthus hodgsoni yunnanensis)
First time recorded from Anuraddhapura in January 1982 by Dr Bob Fleming jnr. an ornithologist from Nepal and regular visitor to the Sri Lanka. A flock was observed and he believes that they belong to the race Hodgsoni (Hoffmann, T. W., 1983a). It was again reported from Hunuwilagama on March 1987 (Hoffmann, T. W., 1988) and at Wilpattu National park on January 2004 (Siriwardana, U., 2005)

Species for which there are only one or two sight records exist, categorized here as unconfirmed vagrants. Problematic records without sufficient details are also included. 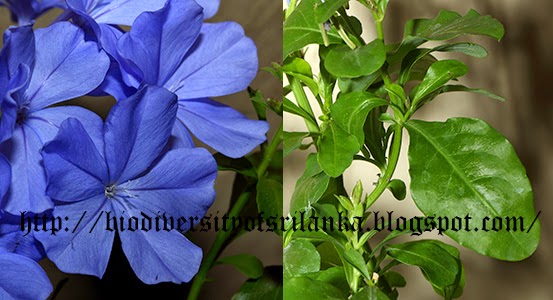 Small shrub native to South Africa. Cultivated in home gardens as an ornamental plant. Flowering throughout the year.
Posted by Bushana at 9/28/2014 06:22:00 AM No comments: 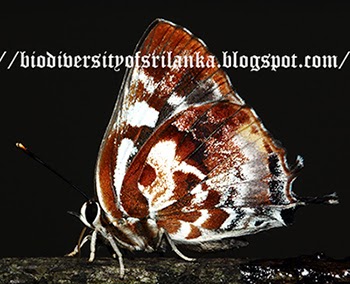 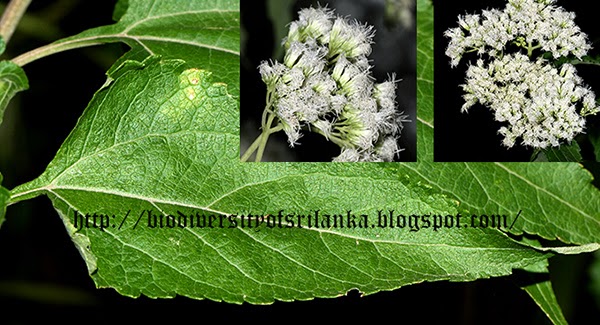 An introduced large herb native to tropical America. Rather common weed mainly in the hill country.
Posted by Bushana at 9/24/2014 06:53:00 AM No comments:

Birds that appear outside their normal range are known as vagrants. This post summarizes up to date published sight records of vagrants of the family Estrildidae (Munias & allies) in Sri Lanka.

Chestnut Munia (Lonchura atricapilla)
While including this bird to his country list base on a remark made by Layard that he found this Munia at Galle, Legge suspected that its presence in the Galle district must have been owing to a flock escaped from a ship at Galle harbor (Legge 1880 : 850). However during 1977-1981 pest species survey it was seen by Dr Sarath Kotagama in the Hingurana and Udawalawe areas and again recorded at Ridiyagama by A.J. Vincent (Kotagama S. & Ratnavira G. 2010:.318) 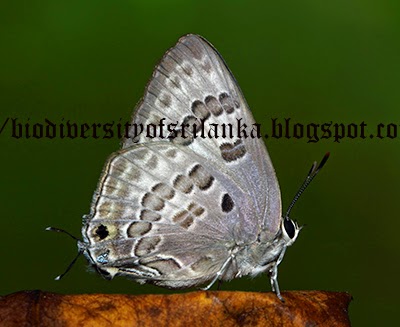 A rare butterfly flies in drier parts of the country. This butterfly has a habit of chasing other passing by butterflies, darting out from a particular leaf which it selected to rest during the hottest hours of the day*. Its larval host plant is කුකුරුමාන් (Catunaregam spinosa) and larva feeds on its fruits.

*Same habit has been observed on some other butterflies of widely different families
Posted by Bushana at 9/20/2014 07:07:00 AM No comments: 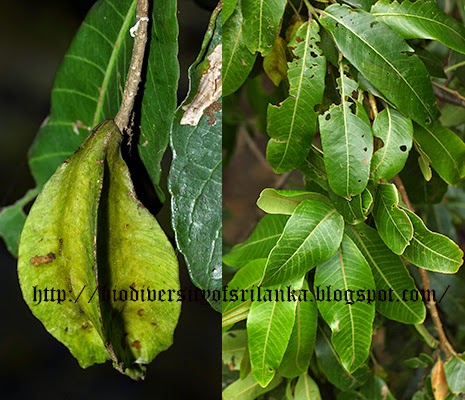 An endemic and rare damselfly inhabiting streams and rivers from lowland to mid hill forests in southwestern part of the country.
Posted by Bushana at 9/16/2014 07:18:00 AM 1 comment: 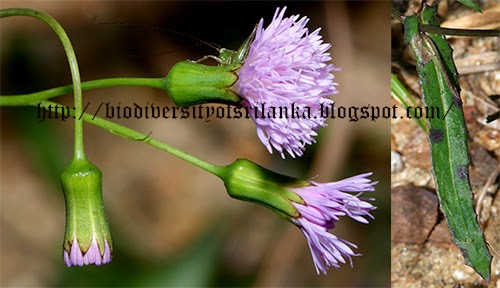 An endemic herb found on disturbed places, patanas and road embankments from low to middle elevations.
Posted by Bushana at 9/14/2014 07:08:00 AM No comments:

Rather rare butterfly with local distribution in south-central and south-eastern part of the country from Haldummulla to Batticola and there to Trincomalee. Larva feeds on කඩුම්බේරිය(Diospyros melanoxylon) (Woodhouse L.G.O., 1950) 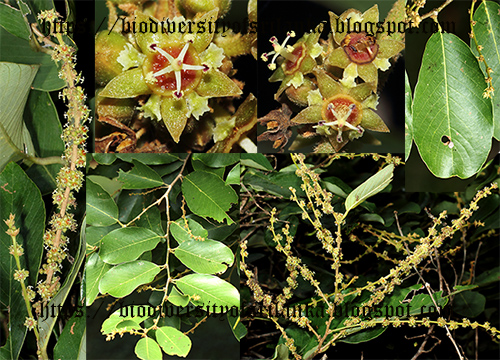 A small tree distributed in dry and intermediate forest subcanopy. Infrequently in wet zone forests also. Roots and barks use in traditional medicine and wood use in construction industry.
Posted by Bushana at 9/10/2014 04:59:00 AM No comments:

Birds that appear outside their normal range are known as vagrants. This post summarizes up to date published sight records of vagrants of the Falconidae (Falcons) and Accipitridae (Osprey, Kites, Hawks & Eagles) families in Sri Lanka.

1)Lesser Kestrel (Falco naumanni)
Lesser Kestrel was recorded first time in Sri Lanka by Deepal Warakagoda on 7th February 1995 at Palatupana of Yala National Park (Hoffmann, T. W., 1996). Sight records from Udawalawe on November 2003 and Horton plains National Park on December same year are the 2nd and 3rd records of it, for the island (Warakagoda, D., 2004)

3)Egyptian Vulture(Neophron percnopterus ginginianus)
An immature Egyptian Vulture probably driven to the south by the North-East monsoon from India appeared at Nuwaraeliya in March 1874.  It was shot by Grinlinton of the P.W.D while roaming about bazaar in search of foods (Legge 1880:3). There is another sight record made by Iris Darnton in January 1950 of a single bird from the Jaffna peninsula (Phillips 1978:18).

4)Grey-faced Buzzard (Butastur indicus)
A single specimen collected in 1934 from Polgahawela by W.S. Lang and now deposited at the Museum of Vertebrate Zoology; University of California is the only record of this species from Sri Lanka. However it is suspected as a specimen of a captive bird (Kotagama S. & Ratnavira G. 2010: 194 Quoting Rasmussen & Anderton 2005: 101)

6) Bonelli's Eagle (Hieraaetus fasciatus fasciatus)
Single specimen collected by R. Templeton prior to 1858 and identified by Blyth is the earliest record of the occurrence of Bonelli’s eagle in Sri Lanka (Whistler 1944: 242). Second record of it is the sight record of Deepal Warakagoda at Bundala National Park on December 2000 (Senanayake, N., 2001) while third being at Ratugala in March 2002 (Siriwardana, U., 2003). However there is a reference for another earlier unconfirmed single sight record at Randeniyagala on August 1995 (Hoffmann, T. W., 1996).

Species for which there are only one or two sight records exist categorized here as unconfirmed vagrants. Problematic records without sufficient details are also included.


7)Back-thighed Falconet [Black-legged Falconet] (Microhierax fringillarius)
W.E. Wait included this falconet to his monograph base on a comment made by E.E. Green of presence of it in Sri Lanka (Wait 1931: 283). E.E. Green’s description of two incidents appeared in Spolia zeylanica vol 8 page 287 is quoted here. “For those who are interested in bird life, I would draw attention to the probable occurrence of an unsuspected bird in the hilly parts of Ceylon. I refer to one of the smallest of the hawk tribe, a falconet, three species of which are found in India. The first suggestion of the presence of such a bird came to me through a planter in Hewaheta, who described to me how he had seen two black birds fighting, and how one of them had killed the other and had flown away with it. I had, later, the good fortune to witness a similar occurrence myself. In this case the victim was a common “bulbul." I was attracted by its cries of distress, and came upon the scene just in time to see it disappearing over the trees in the clutches of a tiny dark-colored hawk that looked no bigger than itself. Naturally, I had no gun with me, and so was unable to verify my observation. If our falconet is identical with one of the Indian species, it will probably prove to be Microhierax fringillarius, the smallest of the three, which ranges through the southern portion of Tenasserim, Malay Peninsula, Sumatra, Borneo, and Java. This species is said to feed more exclusively upon birds.” (Green E.E.,  )

8) Red-necked Falcon (Falco chicquera chicquera)
Legge included this Falcon to his monograph base on the Layard’s observation of it in the flat country near Pt. Pedro (Legge 1880: 150). Legge further noted that since it is found in the extreme south of the Indian peninsula there is no reason against believing of visiting this little falcon of northern shores of Ceylon. Wait also considered this bird as a possible falcon in our lands referring to Layard’s observation mentioned in Legge’s and also due to its occurrence of practically all over India (Wait 1931: 282). There is a reference in Kotagama & Ratnavira (2010) of a sight record in 1986 quoting CBCN 1986, June: 22 but annual reviews of CBC notes for 1986 doesn't contain such a sight record (Hoffmann, T. W., 1987)

9) Eurasian Sparrowhawk (Accipiter nisus nisosimilis)
Deepal Warakagoda’s sight record of Eurasian Sparrowhawk at Ambawela in 2003 is considered as the first and only record of occurrence of this raptor in Sri Lanka (Warakagoda, D., 2004). However under ‘List of rejections (after 1990) ‘of Ceylon bird club there is a reference of another possible previous sighting of a single bird near Sigiriya on 24th December 1993, which was  rejected by CBCCRRC as claimed record was not meeting the criteria for the Sri Lanka List or the Appendices by the CBCRRC. (http://www.ceylonbirdclub.org/List-of-Rejections.pdf) 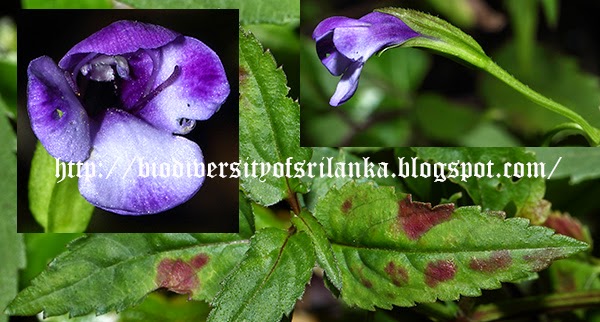 An endemic herb with creeping stems, occurs between 160m to 1800m elevations from wet lowlands to hills.  Much common in the hill country. Usually found among short grasses in shaded places near streams.  Flowering throughout the year.
Posted by Bushana at 9/05/2014 07:24:00 AM No comments: 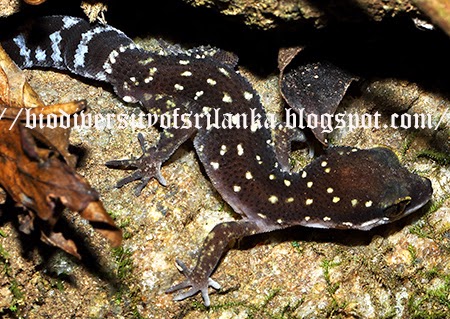 Spotted Bowfinger Gecko is a ground dwelling gecko found under stones, among leaf litter and under decaying logs of forests, plantations and home gardens in wet lowlands and mid hills below 700m elevation and few wet and shaded localities of the dry and intermediate zones. Mainly a nocturnal gecko though juveniles might active even during the day time.
Posted by Bushana at 9/02/2014 08:38:00 PM No comments: