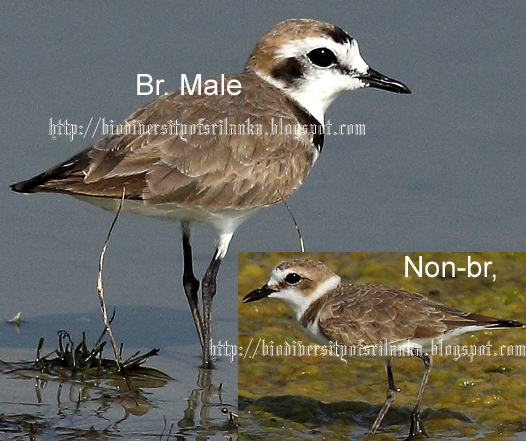 A rather common breeding resident (race seebohmi) found in dry lowlands are supplemented by an uncommon winter migrant of the race curonicus to the both dry and wet lowlands. It can be observed in lagoons, large tanks, mudflats, marshes and sea coast in pairs or as small flocks, often with other waders.  Kentish Plover is very active bird and when feeding it runs here and their, stop only to pick up insects which consists of its main food. The breeding season is from March to April and 2-3 eggs are laid in a depression on short grass near water. 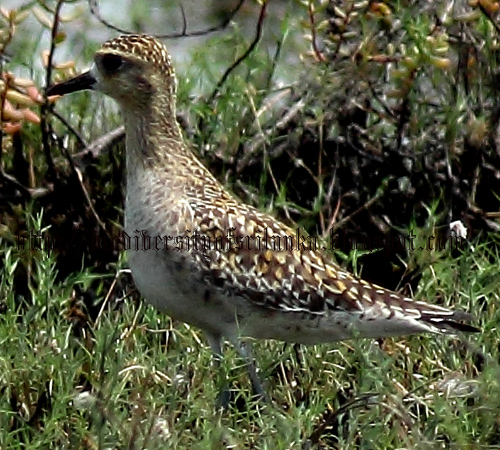 Common winter migrant to the lowland lagoons, marshes, grasslands adjoining large water bodies, mudflats, dry paddy fields etc. It is much common in dry zone. It lives as small to large flocks. Its food mainly consists of insects like grasshoppers, beetles etc. crustacean and worms. It feeds on typical plover habit of often run a short distance, pause and peck. 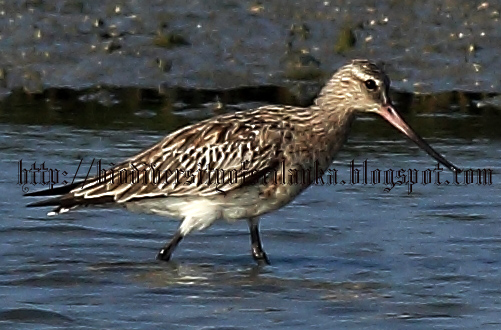 A rare winter migrant to the northern dry coastal areas such as lagoons, mudflats, estuaries etc. Occasionally some birds can be seen in southern coastal areas as well. In its non-breeding plumage Bar-tailed Godwit is very similar to the Black-tailed Godwit but can be distinguished from it by black and white barred tail (Tail is complete black of Black-tailed Godwit ) and more up-turned bill. It feeds wading in shallow water on worms, crabs, and other small aquatic animals, mostly as solitary individuals or as small flocks.
Posted by Bushana at 3/26/2013 07:23:00 AM No comments: 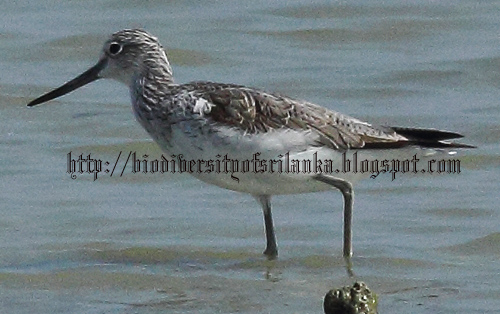 A common winter migrant to the low country coastal areas. Commonest in the dry zone lagoons  tanks, salterns and estuaries. Rare and local in the wet lowlands. It is mostly a solitary bird though sometime scattered flocks are not unusual in water edges or sometime in deeper water probing the mud and picking up small aquatic animals such as crabs, worms, insects and mollusks. 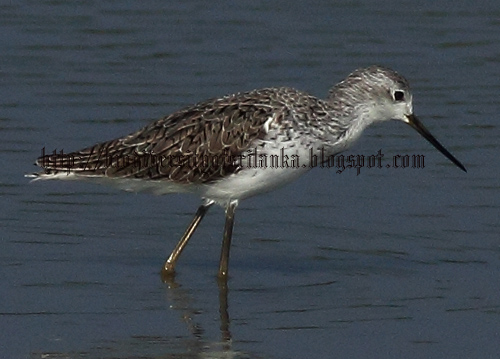 Common winter migrant to the lowlands. Mostly to the dry zone coastal areas such as lagoons, estuaries, mangroves, salt-pans, and sometime inland marshes, large tanks and flooded paddy fields. When feeding it keeps singly or in small or large flocks. Marsh Sandpiper feeds on small aquatic animals such as crabs, prawns, worms etc. It has a very fast flight and also can swim well.
Posted by Bushana at 3/21/2013 07:25:00 AM 1 comment: 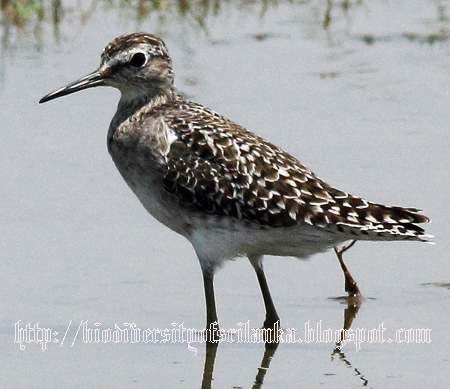 Common migrant to the coastal areas, lagoons, mudflats, marshes, tanks and paddy fields in the dry lowlands. Occasionally found in the hill country and wet lowlands. Unlike most other migrant waders Wood Sandpiper prefers freshwater bodies. It feeds on small aquatic insects, such as beetles, bugs, larvae, etc. usually as solitary birds or as small to large flocks. 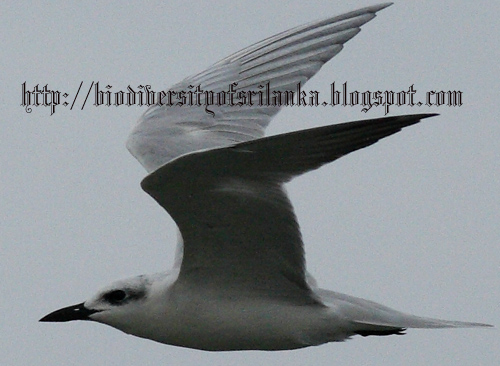 Common winter migrant to lagoons, estuaries, sand spits, salterns and large tanks of dry coastal areas. Scarce in wet coastal areas and inland wetlands. Also summer loiterer. It is also believed that possible breeding may occurs on islets. It flies usually low over the water surface solitary or in small scattered flocks, every now and then dipping to catch water insects, fish, frogs, crabs, prawns etc. When not feeding it rests on sand banks often with other terns. Gull-billed Tern nests as colonies on sand banks on the shores of lagoons or sandy islets. Breeding season is from April to June.
Posted by Bushana at 3/17/2013 07:39:00 AM No comments: 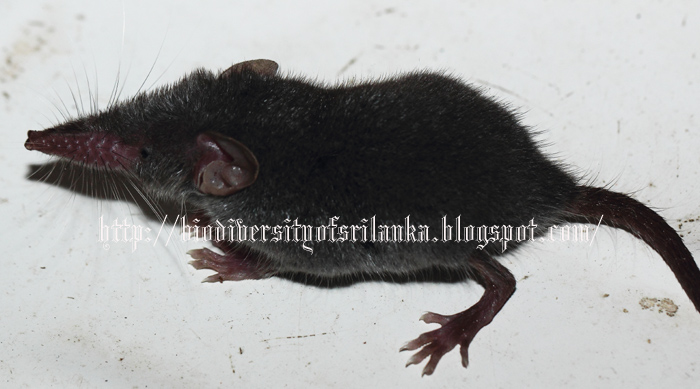 Common Musk Shrew is the most common, widespread and also largest of the ten species of shrews in . It inhabits houses even in large cities throughout the island as well as some of the off-shore islets (Phillips W.W.A. 1980). During the day time it hides in crevices of walls, boxes, piles of goods and emerges in the evening. It is a nocturnal animal and it is said that because of its high metabolic rate shrew eat its own body weight of food in the course of a night. House Shrew is a carnivores animal and it preys on geckos, worms, scorpions  insects [ex: cockroaches], spiders and even small mammals - sometime bigger than its own size - like mice, frogs and snakes. It also eats grains such as rice and fruits when others foods are scarce. It is believed that House Shrew is not indigenous to the and has been imported many years ago with goods from Indian port cities (Phillips W.W.A. 1980). House Shrew is an animal beneficial to the man since it preys upon most noxious animal live in houses and also driving away rodents. 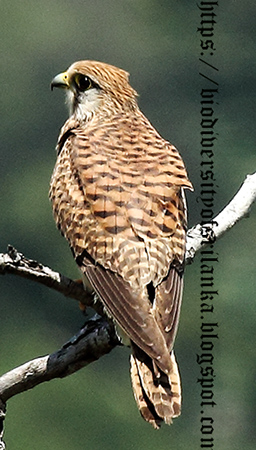 Common Kestrel occurs as two sub species in the island. European Kestrel or race tinnunculus is an uncommon winter migrant to the open country, forests and scrub lands of all climatic zones while Indian Kestrel or race objurgatus is a scarce breeding resident in the hills. According to the Dr Sarath Kotagama race interstinctus or Eastern Kestrel is also occurs as an uncommon migrant to the all zones of the island (Kotagama S. & Rathnavira G. 2010). Common Kestrel feeds mainly on lizards and insects like grasshoppers. It also preys on nestlings of ground-nesting birds, whenever it can find them (Henry G.M. 1998). The breeding season of the resident race is from March to June and it is said that it doesn't build a nest but deposits 2- 3 eggs on a ledge of rock on the face of an inaccessible cliff. While its staying in the country Common Kestrel is mostly a solitary bird and can be seen frequently hovering or perching on high branches in search of small animals to prey on with its keen eyes.
Posted by Bushana at 3/13/2013 07:33:00 AM 1 comment: 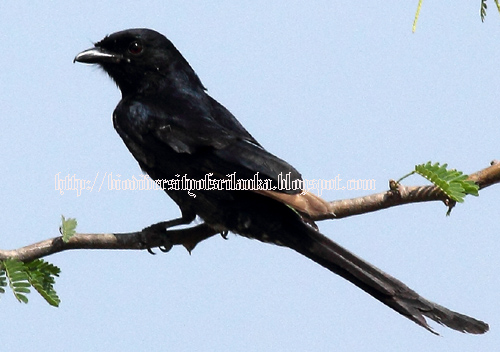 Locally common breeding resident in north and north-western dry lowlands of the country. Uncommon in north-central area and occasionally some birds are reported in southern parts during the winter migration period (Warakagoda D. et. al., 2012).  It inhabits open areas, forests and scrub lands usually as solitary birds or in pairs. Black Drongo feeds on flying insects, sallying forth from a fence, branch of a tree, telephone or power line, or any other such vantage point.  Like other drongos Black Drongo also mimics calls of varies other birds, cat etc. The breeding season is from March to May and it makes a cup shape nest with fine twigs, fibers  and cobwebs and placed it in a fork of a tree often in very exposed situations. Black Drongo can be distinguished easily from other drongoes by all black body and pale spot at base of the bill. 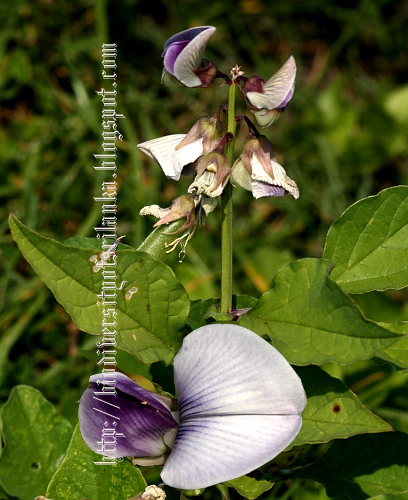 An indigenous very common herb of about 1m tall grows along roadsides and waste lands of both wet and dry lowlands.
Posted by Bushana at 3/09/2013 08:09:00 AM No comments: 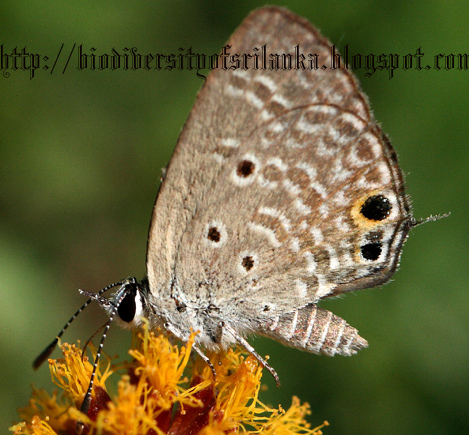 Small Cupid is an uncommon butterfly confined to the northern dry zone of the island.  It can be easily confused with the superficially similar Plain Cupid, but Plain Cupid (30mm) is larger than Small Cupid (20mm) and restricted to the wet zone of the island where latter does not fly. No records available of its food plant or early stages of the life.
Posted by Bushana at 3/07/2013 07:14:00 AM No comments: 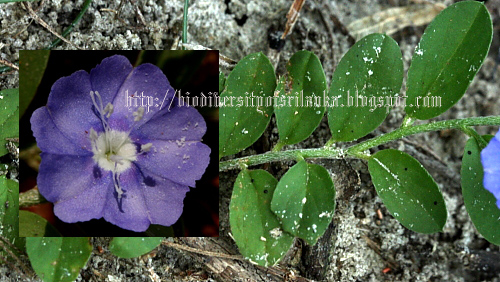 A trailing herb common in open areas, sandy grounds, roadsides, beaches and cultivated fields in almost any dry site but much more abundant in the dry zone. The plant is native to tropical and introduced to the island in some unknown period of the history. However it is widely used in Ayurvedic medicine to cure almost anything from depression to dysentery (Flora of Ceylon Vol 1 1980)
Posted by Bushana at 3/05/2013 07:21:00 AM No comments: 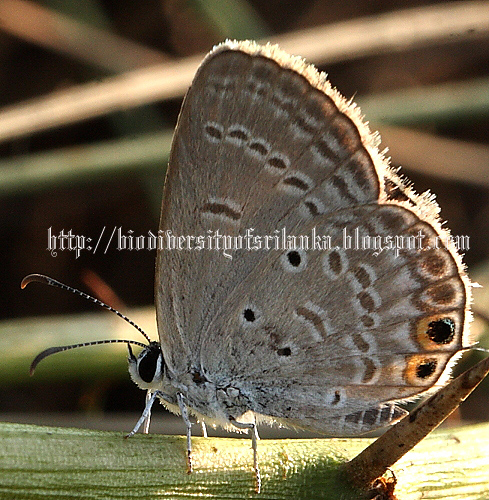 An uncommon butterfly found in intermediate and dry zones of the . However it is more plentiful in the north of the island. According to the Woodhouse it is to be found, chiefly in February, March and May in the dry zone, particularly the north of the island (Woodhouse LG.O., 1950). Ormiston noted that it is frequently a serious pest to the gram crops in (Ormiston W.,  1924). Hence its vernacular name. However according to the de’Abrera it has yet to prove so in (de’Abrera B., 1998 ). Gram Blue is subject to considerable seasonal variation in size and the intensity of blue on its wings.  Its larva attended by ants and feeds on various plants of the family Fabaceae such as Li-me (Vigna unguiculata) and Acacia spp.
Posted by Bushana at 3/03/2013 07:26:00 AM No comments: 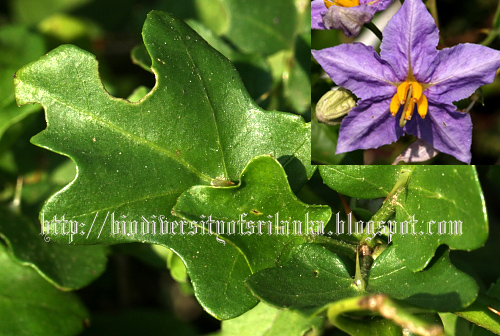 An uncommon indigenous slender prickly scrambling shrub grows in northern dry lowlands. Flowering during the rainy season. The fruits are edible and whole plant is used in Ayurvedic medicine. According to the Flora of Ceylon (Vol 6 page 382) “The lack of recently collected materials may indicate that it is decreasing in occurrence”