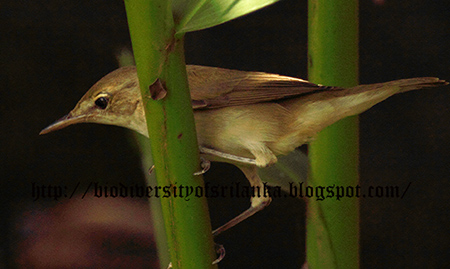 Rather common winter migrant to gardens, reed-beds, plantations and scrublands throughout the island. It arrives in October to November and during its stay in the island Blyth's Reed-warbler entirely feeds on small insects, while hopping actively among bushes and trees in search of them. In the evening it likes to settle on a dense shrub or a reed-bed in a marsh. It breeds in Eastern Europe and Northern Asia and leaving the island in April to May.
Posted by Bushana at 1/29/2017 03:24:00 PM No comments: 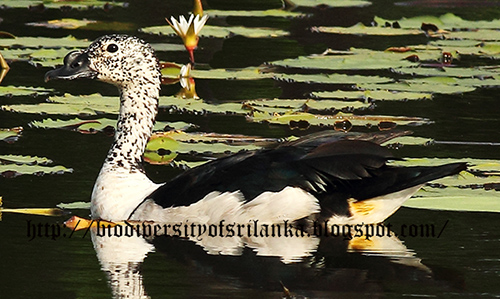 Comb Duck or Knob-billed Duck is now considered as a very rare winter migrant to the weedy tanks and water holes adjoining or in forests of the dry lowlands (Warakagoda D. et, al., 2012). However earlier it was considered as a common breeding resident, though nowhere numerous (Legge, V, 1880) In Legge's time it was not uncommon on the tanks of the Vanni and common though not plentiful in the North-Western province and Anuradapura district, frequenting the Medawachchiya and other tanks. It was also found at Mulative and Toopoor, south of Trincomalie. In the eastern province it was inhabited Ambare [Ampara?], Irukkaman and other tanks. Fisher, C.C.S. found it breeding near Yala and there were also records from Tissamaharama tank and probably from Urubokka and other tanks near Tangalla (Legge, V, 1880).

As per W.E. Wait this large duck is nowhere common but may be met with in small flocks on large weedy tanks in the heart of the jungles in the north and east of the island (Wait, W.E. 1931)

While contributing an article to the Loris magazine on the Decrease of Wildfowl in 1951 C.E. Norris doubted whether Comb Duck can be considered as a resident breeding species or even present any longer in the island. The extermination of this duck from the island he considered occurs due to extensive shooting by [so called] 'sportsmen'.

On 4th December 1960 two large ducks believed to be of this species were observed by C.E. Norris at Lahugala and again on 21st February 1961 a courting pair was observed at the same location. The second observation was made by a game ranger P. Jayawardena and he had obtained excellent view of them and identification was confirmed.  Referring these observations W.W.A. Phillips noted that few ducks may be still survive as residents in that area though it had not been observed during that century and was believed to be extinct from the island. (Ebbels, D.L, 1961 & Phillips, W. W. A., 1978) It was also observed at Ruhunu National Park (Yala) during the same period and not been seen again (Savage, C.D.W., 1968)

Sarath Kotagama & Prithiviraj  Fernando in 1994 and J. Harrison & T. Worfolk in 1999 considered it as an extirpated bird species from Sri Lanka.

Report from the Ceylon Bird Club for 2002 recorded two Comb Ducks at Vaddukoddai on March 2002 (Siriwardana, U. 2003a) and it was also observed during the annual waterbird census for 2003 conducted from mid January to mid February by the CBC, in association with Wetland International [Observed location was not mentioned](Siriwardana, U. 2003b). 2004 CBC Report also given two observations. One at Uduvil of Jaffna peninsula on February 2003 and another 3 birds at Giant tank on April same year. (Warakagoda D. & Sirivardana U., 2004)

Probably considering these occasional observations, in their second edition of the Field Guide to the Birds of Sri Lanka Harrison J & Worfolk T. noted that Comb Duck is possibly becoming re-established in the island. However Kotagama S. and Ratnavira G. in 2010 while mentioning above two observations in Mannar and Jaffna areas considered it as a status uncertain bird also stating that it was a former resident but was considered as an extirpated bird later on.

It re-appeared again in 2012 with several sightings. Weeratunga V. et. al. reported flock of five males from Wewegama tank in the proposed Mattala Manage Elephant Range in July 2012. Even before that Dr. Thilak Jayaratne made an observation at Vankali lagoon on 16th April and Asith Jayewardhane reported 13 birds at Magalle tank in Nikawaretiya on 21st July (It was the largest number of birds recorded from Sri Lanka in the recent history.) Also 10 individual were reported from Debarawewa by H.K. Janaka on 3rd August 2012 and 3 females in Bundala on 15th September by H.K. Janaka and Dr. Prithiviraj Fernando. (Weerathunga V. et. al., 2013 ). Report from the CBC for 2012 contains several more sightings (A bird was seen by Nanda Senanayake and others in early July, 3 males observed at Giant tank on July, 12 at Debera wewa on August, Single bird at Embilikala and 6 at Debara wewa on September and another single bird at Mannar during December same year) - (Samaraweera P., 2013)

* Above single bird was photographed at Olupattawa wewa near Polgasowita of Colombo district on 25th January 2017.

Habits:
Comb Duck inhabits weedy tanks and lives as small flocks. It feeds on varies vegetable substances like grains, grasses, seeds of water plants, paddy and also variety of aquatic animals. It has a powerful speedy flight. It is less nocturnal contrary to most ducks and roosts at night on larger boughs of trees. The breeding season on Sri Lanka was reported as February to March. The nest is a collection of grass and sticks mixed with feathers and placed in a large hollow in the trunk of a big tree growing near water where it lays 7 to 12 or more eggs. It breeds in Africa, India, South China and South America. 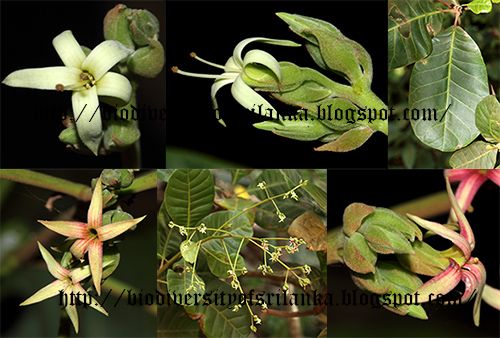 An introduced small tree native to tropical America. Introduced to Sri Lanka by Portuguese and now widely cultivated as a fruit tree in both wet and dry zones. Also naturalized in the dry zone. The seeds are edible and known as Cashew nuts. Flowering mainly after the wet season.
Posted by Bushana at 1/15/2017 06:57:00 PM No comments: 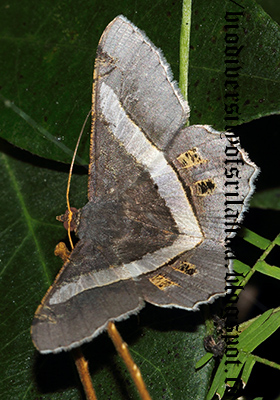 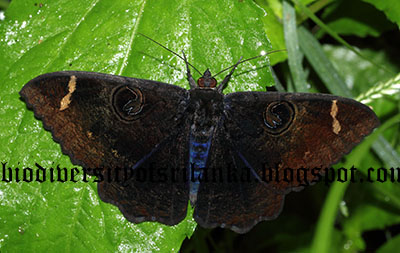 Common native vine found in thickets, forest edges, grasslands, roadsides and waste lands. It forms loose nets of vines on the ground across other vegetation.
Posted by Bushana at 1/08/2017 07:01:00 AM No comments: 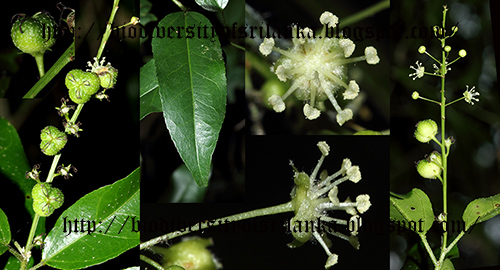 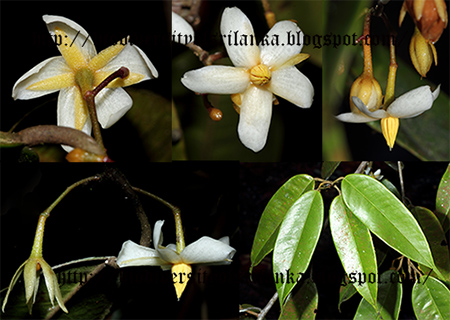 A Critically Endangered endemic tree only known from Kitulgala forest.
Posted by Bushana at 1/05/2017 07:06:00 AM No comments: 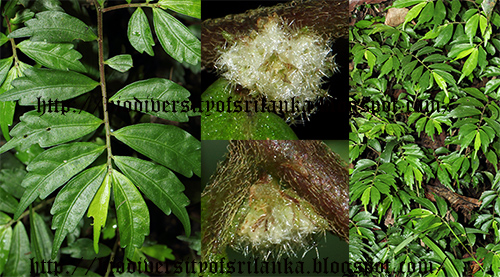 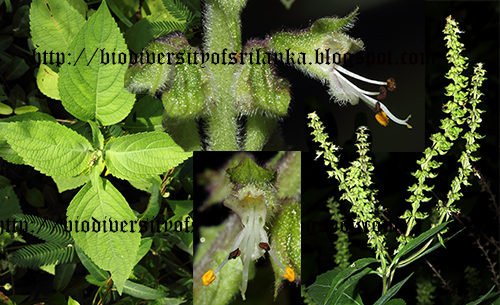 Common native shrub or undershrub found along shaded roadsides and waste places from sea level to about 530 m a.s.l. Flowering throughout the year. The leaves have a mint or camphor like scent when bruised.
Posted by Bushana at 1/03/2017 06:58:00 AM No comments: 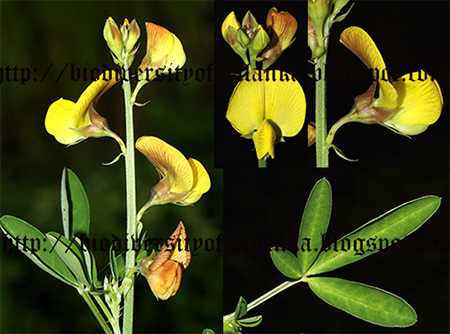 Common native annual herb occurs in the dry zone areas and occasionally also in the hill country.
Posted by Bushana at 1/01/2017 06:23:00 AM No comments: