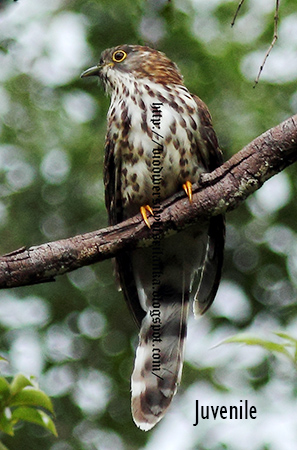 Race ciceliae is rather uncommon breeding resident from foot hills to the higher hills. Migrant race varius is also very rarely recorded from the lowland areas.  It inhabits well wooded gardens, tea estates, forests, etc. Common Hawk Cuckoo feeds mainly on insects in canopy. But it is said that it also eat some berries and wild figs. It is mostly a solitary bird though sometimes encounters in pairs. It calls day and night during the breeding season though a silent bird out of the season. The breeding season is from January to April and it is a parasitic on babblers.

* Common Hawk Cuckoo very closely resembles the Shikra not only in both adults and juvenile coloration, but also by habitual posture, style of flight and even size.
Posted by Bushana at 2/28/2017 09:03:00 PM No comments:

An introduced shrub native to the Indonesia. Widely cultivated for the musky-scented leaves, commonly used in cooking as a flavoring. Probably introduced several centuries ago. Its Indonesian name Pandan rampeh is long used in Sri Lanka as Rampeh. This species doesn't flower.
Posted by Bushana at 2/25/2017 08:11:00 PM No comments: