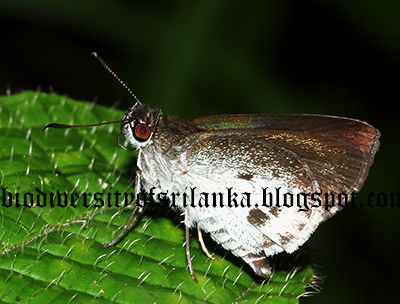 Rather rare insect found in forested habitats of southwestern wet zone. Few colonies are also inhabiting below Revestone and Corbet's Gap areas of the Knuckles range. It's flight season is from April to June (Woodhouse noted that it has been captured between July and November in Kandy district). The larval host plants are Loxococcus rupicola[රන් දෝතළු], Calamus pseudotenuis[හීන් වේවැල්] (At the higher elevations) and Calamus radiatus[කුකුළු වැල්] (At the lower elevations). It probably feeds on leaves of other Calamus species.
Posted by Bushana at 4/30/2017 08:58:00 AM No comments: 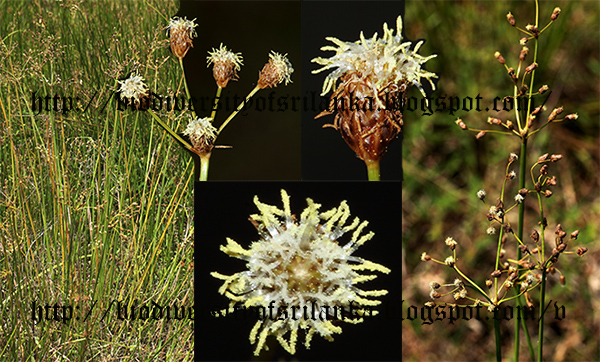 Common indigenous annual or apparently biennial of wet grassy places at low elevations. Often a weed in paddy fields.
Posted by Bushana at 4/27/2017 06:50:00 AM No comments: 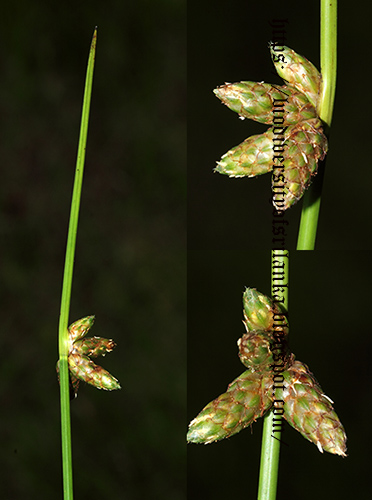 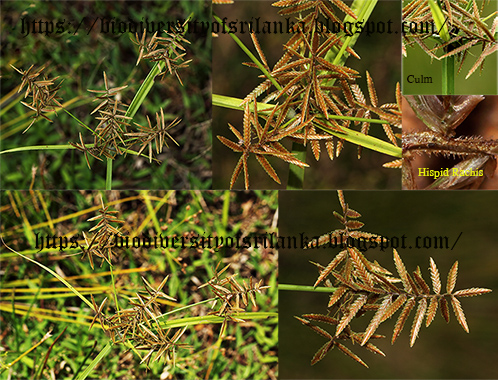 Rather common native plant of moist low country to higher hills. Also in Intermediate zone.
Posted by Bushana at 4/25/2017 06:49:00 AM No comments:

Common native plant occurs in open marshy areas and margins of paddy fields at low elevations.
Posted by Bushana at 4/23/2017 05:00:00 PM No comments: 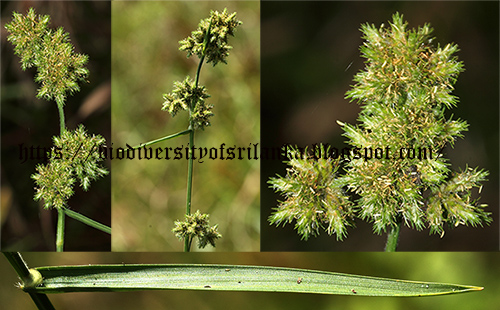 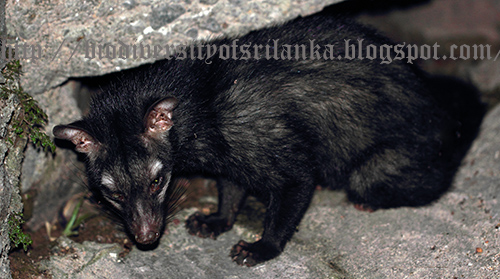 Common animal distributed throughout the island, inhabiting rocky outcrops and/or trees in the country side and roofs of houses in urban areas. It is a purely nocturnal mammal and spends the day time curled up, asleep in its day time hideout usually a ceiling of a house in cities where rocky areas or tall trees are not readily available. It is mainly an arboreal animal and  feeds fruits and berries such as papaw, passion fruits, pineapple, kithul (Caryota urens) etc. But Common Palm Civet also eats rats, mice, frogs, birds, spiders, cockroaches as well as domestic chickens. It has a habit of depositing its droppings which often contain large quantities of undigested kithul and other hard-shelled seeds, on the top of large rocks and fallen tree trunks. It breeds throughout the year though more young are seen in the latter part of the year before the North-East monsoon. The young are brought forth in a hole in a tree, dry nook under overhanging rocks or often in a dry corner of a ceiling. Usually litter size is 3 or 4 in Sri Lanka. Except when a mother is accompanied by her broods it is usually seen singly.
Posted by Bushana at 4/13/2017 04:24:00 PM No comments: 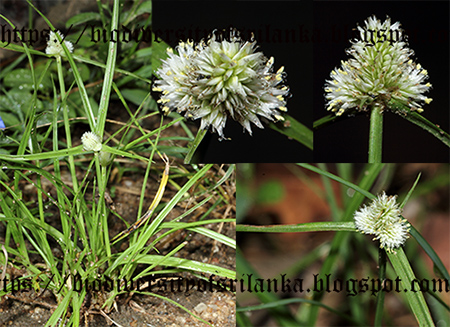 * As per Senaratna L.K., 2001 Kyllinga bulbosa Beauv. is a synonym of Cyperus triceps (Rottb.) Endl. But according to the http://www.theplantlist.org Cyperus triceps Endl. is a synonym of Cyperus dubius Rottb. http://www.theplantlist.org accept Kyllinga bulbosa as a separate species.
Posted by Bushana at 4/11/2017 06:55:00 AM No comments:

An introduced weed native to the tropical Africa and Madagascar. According to the Flora of Ceylon Vol 5 it was only known from a place between Pussellawa and Ramboda at mile 28/10 along Kandy -Nuwaraeliya Rd (950 m a.s.l. ) in the Nuwaraeliya district. It is also noted that apparently it was a rather recent introduction. Since then (1985) it seems that it has become a widely distributed weed in paddy fields, marshes and roadsides, at least in the moist areas from lowland to the hill country (Personal observations).
Posted by Bushana at 4/09/2017 05:23:00 PM No comments:

An introduced tall perennial, native to the tropical Africa and Arabia. Widely cultivated as an ornamental and also escaped and naturalized in grassy places.
Posted by Bushana at 4/08/2017 04:38:00 PM No comments: 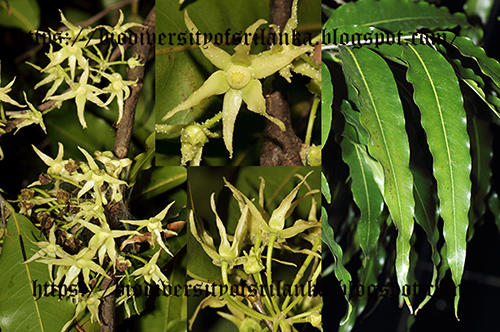 An indigenous tree of dry zone gallery forests along the east coast. The columnar form with pendent branches is often planted in gardens and along roads.
Posted by Bushana at 4/07/2017 07:10:00 PM No comments: 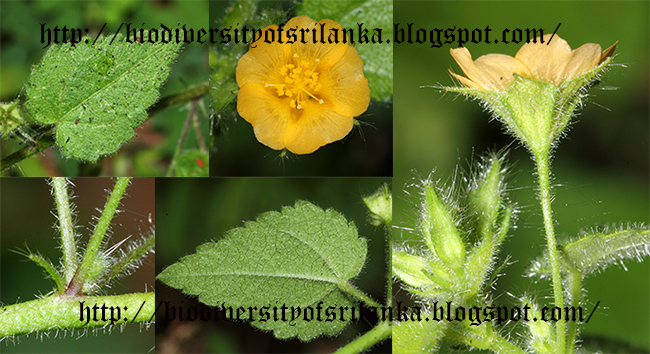 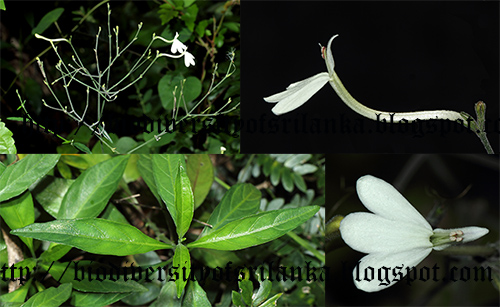 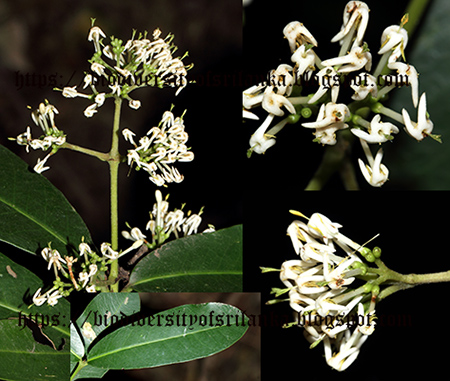 Common native shrub or small tree distributed in dry deciduous forests of the low country and lower montane zones. Flowering from March to July.
Posted by Bushana at 4/03/2017 07:32:00 AM No comments: 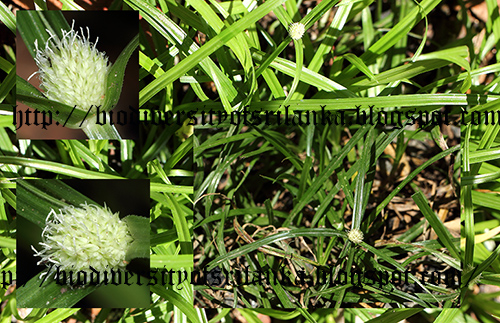 An indigenous perennial stemless herb occurs mainly in pockets of humus on rock surfaces, mostly in shade, but occasionally on exposed moist surfaces. It grows mainly in the Southeastern intermediate zone from 100 to 500 m elevations. Flowering from December to March.
Posted by Bushana at 4/01/2017 08:01:00 AM No comments: