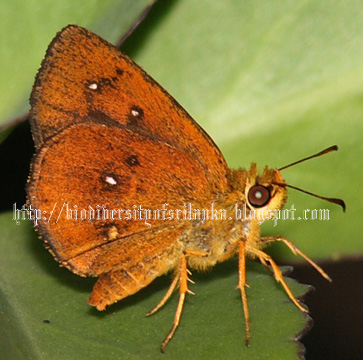 Common insect found in jungles and scrublands in all elevations of the island throughout the year (Gamage R., 2007).  More common in wet zone and probably scarce or absent in higher hills and northern part of the country according to the Ormiston (Ormiston W., 1924). The larva feeds on varies plants of grass or bamboo of family Poaceae.
Posted by Bushana at 9/29/2012 08:20:00 AM 1 comment: 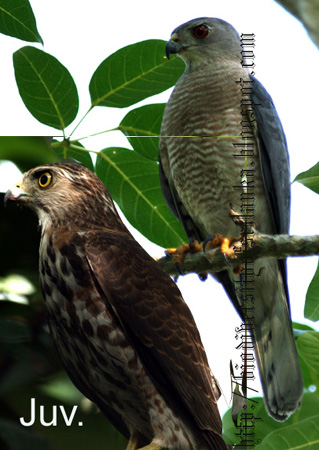 Common breeding resident throughout the island. It avoids dense forests and can be found in open areas, plantations, village gardens and even in towns with some trees. Shikra preys mainly on small birds and lizards. It usually perches high in a tree watching for a prey and flies down to catch it with talons. It breeds from March to May and probably again in August to September and build a nest with twigs and grasses place among foliage high in a big tree.
Posted by Bushana at 9/27/2012 07:52:00 AM 5 comments: 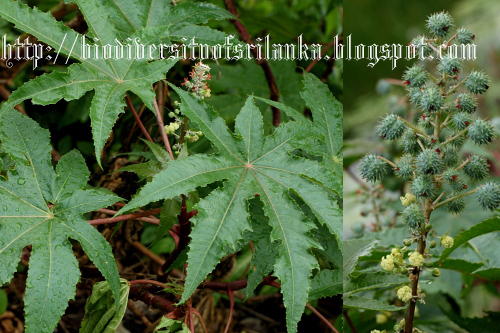 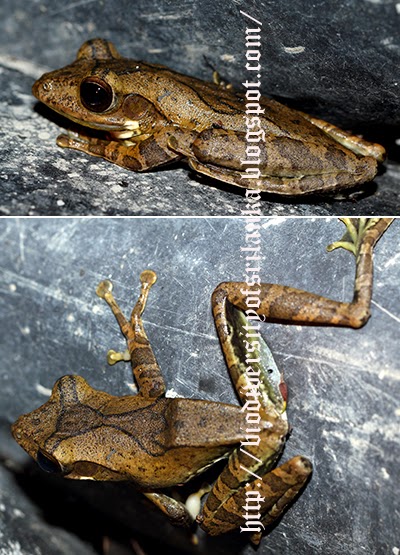 An arboreal frog of about 60mm snout to vent length of male and 90 of female. Endemic to Sri Lanka and distributed in both wet and dry zone up to about 1525m a.s.l though not much common in dry zone. It is much common around anthropogenic habitats and usually it is encountered inside bathrooms, overhead water tanks, banana groves and other such vegetation. 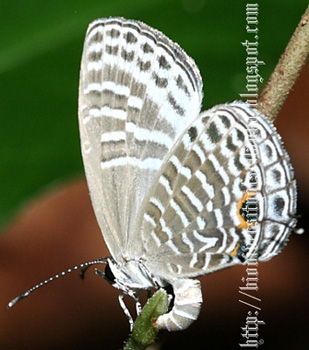 Rare and endemic butterfly found in mid country (Gamage R.,  2007). Ormiston recorded it from Haldummulla, Wellawaya, Monaragala, Ratnapura, and Deniyaya (Ormiston W., 1924).  No record available on feeding plants of its larva.
Posted by Bushana at 9/21/2012 06:56:00 PM No comments: 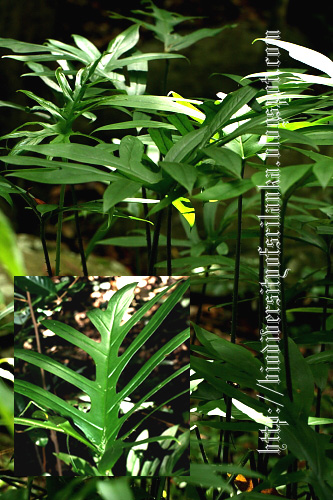 A native herb grows in marshy places in moist low lands. It is also cultivated since inside of stems and tender leaves are used in curries. 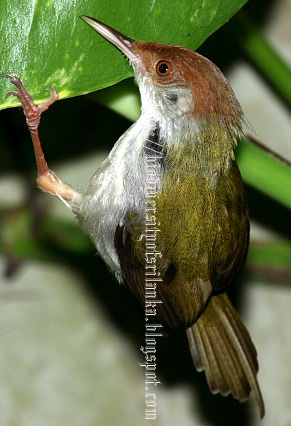 Very common breeding resident found in wooded areas and home gardens both in villages and towns in al climatic zones of the island. It keeps in pairs and actively feeds on small insects, spiders etc. among foliage of trees and bushes, usually uttering its loud and rather monotonous call to keep in touch with its partner. It breeds probably throughout the year but the main season appears to be February to March. Common Tailorbird builds its nest in a cavity formed by sewing together either the sides of a large single leave or of two or more smaller leaves, where it lays 2-3 eggs.
Posted by Bushana at 9/17/2012 07:47:00 AM No comments:

Common introduced perennial herb grows in roadsides and waste lands in both wet and dry lowlands. Native plant of tropical .Flowering throughout the year. 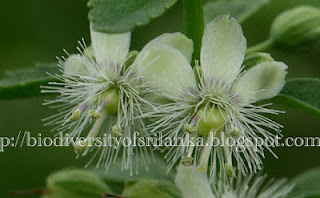 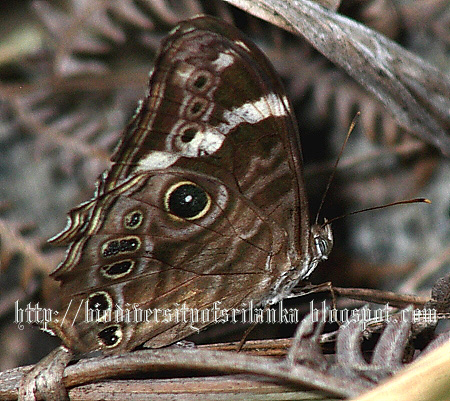 Common butterfly found in hills (Between 500 and 5000ft) throughout the year. Scarce in lower elevations. It only flies very short distance at a time. Larva feeds on varies plants of the family Poaceae.
Posted by Bushana at 9/13/2012 07:43:00 AM 2 comments: 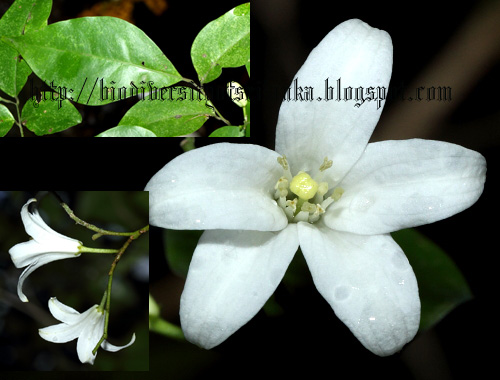 An indigenous shrub or small tree of monsoon forest understory, rocky outcrops and also limestone substrates of both wet and dry zone lowlands up to about 1000m a.s.l.
Posted by Bushana at 9/11/2012 07:21:00 AM No comments: 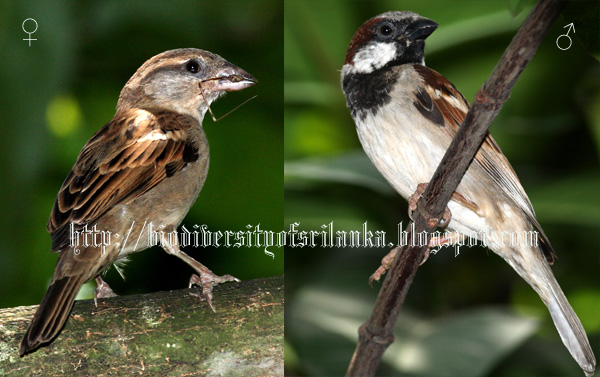 Common breeding resident inhabiting close to the human habitations throughout the country. It feeds in flocks on seeds, insects and food wastes around human dwellings. House Sparrow breeds throughout the year and nest is a mass of grass, straws, etc., line with feathers and place in a cavity in a building. But usually people use to put up earthenware chatties on the walls of houses for these birds so that they can utilize them for nests. 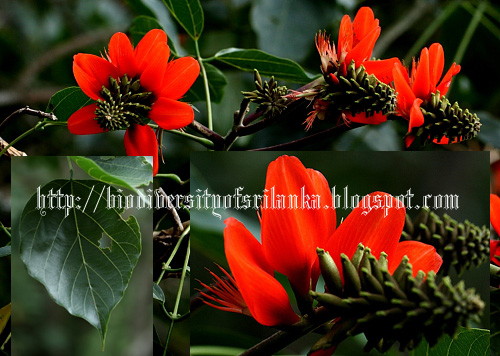 Native tree of tropical . Introduced into in 1852 from Java for shade and green manure in tea and cocoa estates. Flowering from June to January. Bright red flowers attract varies hill country birds such as  whiteeyes, bulbuls, sunbirds etc.
Posted by Bushana at 9/07/2012 07:43:00 AM 3 comments: 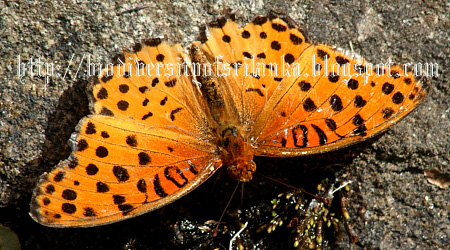 An uncommon butterfly found in hills above 1500m throughout the year. It usually encounters in Patana lands close to forests. Its larval host plan is Viola patrinii of family Violaceae, a very common weed of tea plantations.  Indian Fritillary sometimes basks on pathways and streams, wings outstretched flat and usually coming to the same spot or flies short distance if disturbed.
Posted by Bushana at 9/05/2012 07:25:00 AM 2 comments: 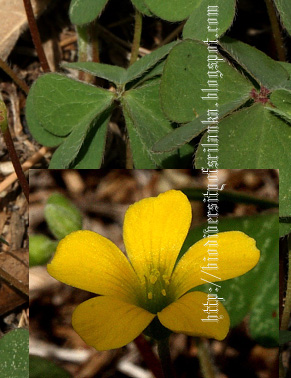 Very common introduced herb found all over the island in cultivated grounds, wastelands, roadsides etc.. Native plant of European Mediterranean region. Flowering throughout the year and flowers open around and close early afternoon.
Posted by Bushana at 9/03/2012 07:34:00 AM No comments: 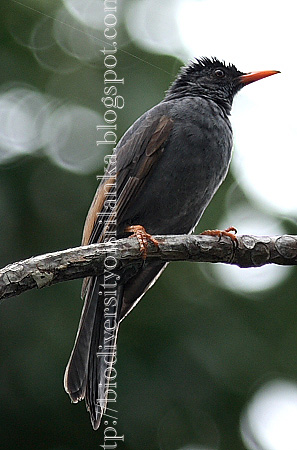 Black Bulbul is a common breeding resident of forests and nearby well wooded home gardens and plantations of wet zone lowlands to hills, while local and rare in dry lowlands (Mostly found in dry zone riparian forests) and higher hills. It feeds mainly on fruits, berries, figs and insects in canopy as small flocks keeping up a continual noisy conversation. Its main breeding season is from March to May and possible second brood occurs again from July to September. The nest is a small cup place on a tree fork where it lays two eggs.
Posted by Bushana at 9/01/2012 07:01:00 PM No comments: