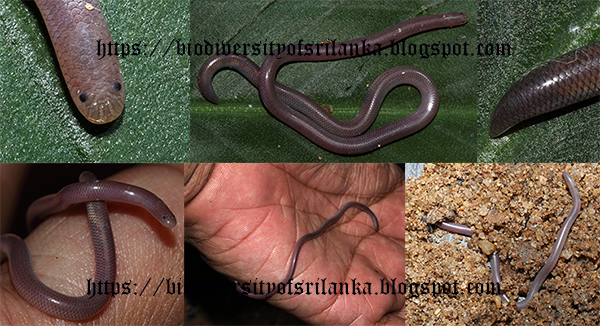 A small non venomous worm like blind snake lives under the soil, under and inside decaying logs, under stones and leaf litter. Brahminy Blind Snake is worldwide distributed as a result of human activities (Transported in the soil of plants. Hence its common name Flowerpot Snake). Flowerpot Snake feeds on ants, termites, insect larvae and on caterpillar droppings. It occurs from low country to about 1200 m elevations in Sri Lanka. It usually encountered crawling on soil surface during rains when they are flooded out of their subterranean haunts. Brahminy Blind Snake is a parthenogenesis (Entirely female) species producing 2 - 7 eggs without mating (In other words each individual able to found a new colony. Probably the only such snake species in the world). There is a belief that Blind Snakes enters the ears of people sleeping on the ground (Hence their vernacular name කණඋල්ලා)